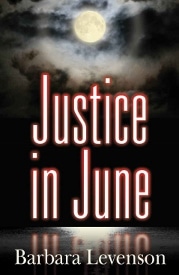 Publishing confuses me sometimes. The first book I read by Barbara Levenson, Outrageous October, was published in 2013. I didn’t like it. It was also the third book in the series (which didn’t help). Now, the first two books in the series – Fatal February and Justice in June – have 2014 publication dates. What? I don’t know what happened there, but I can say that I enjoyed Justice in June far more than I expected, and much, much more than Outrageous October. Maybe time/space anomalies are good for cozy mystery series.

In this, the second installment of Levenson’s Mary Magruder Katz mysteries, Mary is on her home turf in Miami, madly in love with her beau Carlos and her new law practice is really starting to take off. So much so, in fact, that she spends the entire book frantically trying to keep up with her two very high profile cases. She has Judge Liz Maxwell who’s about to be accused of misconduct on the bench. This one’s touchy since it involves the courthouse and its systems. Then she has Luis Corona. Luis is the son of friends of the parents of Carlos. Yeah, it’s convoluted, but Mary is learning that Carlos’s large family extends beyond blood lines. Luis is being held without counsel as a suspected terrorist. So not only is Mary scrambling to try and figure out where he is, she’s dodging vicious calls and messages accusing her of supporting terrorism. Both at the same time? MAYHEM!

I have to admit that I still don’t love the character of Mary Magruder Katz – especially in her personal life. She’s infantile in the way she deals with Carlos and allows him to be the same. It’s annoying and I’m sick of hearing how handsome and sexy he is. Repeat something often enough and I start to cringe. But I did really like how she handled herself in the courtroom and in the investigation of her cases this time around. The pace is whirlwind (when not being derailed by another stupid Carlos argument) and both cases are interesting and complicated. Levenson manages to do them both justice and nicely represent the physical and emotional toll of being a very busy solo practitioner.

So a pretty good grade for Justice in June. I’m interested to see how Mary’s relationship with Carlos began in Fatal February, with the hope that it might mature into something less aggravating in future installments. Levenson can obviously write a well plotted, well-paced cozy mystery, she just needs to get a handle on her main character’s annoying romantic habits.

Thanks to Maryglenn McCombs for sending me a review copy of Justice in June.