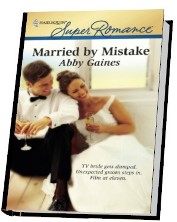 If I had seen this cover I would have been spared much pain.

Ah, the perfect beach read.  Light, breezy and with liberal touches of impossibly perfect sex.  What more can you ask as you sip a tropical drink?  Married by Mistake* seems tailor made for lazy days where no heavy thinking is required.

Casey Greene foolishly decides to surprise her longtime fiancé with an impromptu wedding on live television.  All he has to do is propose (again) and they’ll be married then and there and shuttled off on a free honeymoon!  It does not go as planned.  In order to keep their sponsors happy, station manager and all around hunky bachelor Adam Carmichael steps in and through gritted teeth proposes to the stunned Casey.  Knowing that the wedding is fake she goes along, desperately trying to mitigate her very public humiliation.

Needless to say, there are complications.  Adam and Casey find themselves posing as husband and wife for an eager public as well as their families despite being strangers that don’t even like each other.  I WONDER WHAT WILL HAPPEN???

Oh, there are so many, many things to hate about this book.   But let’s start out with the good things.  It appears to have had an editor and is not filled with typos and is a lightning fast read.  That’s it; now let’s move on to the rest.

First of all, there’s the ludicrous premise.  It’s stupid, unbelievable and ridiculously lame.  Then we have our main characters.  Casey wants to get married so she can get out from under the thumb of her needy family.  Seriously?  Of course Adam bullies her into cutting off all contact with them – he’s her strong, take charge (wealthy) hero!  Or a creepy controlling stalker.  He’s also a hot head who cares more about money than anything and is callous enough that he might as well have no soul.  But Casey is his damsel in distress and he will become a better man just by being with her!  He hates that he’s developing feelings for her – that should give you a good enough sense of him as a crappy human being. And Casey?  She’s just a simpering fool.  Author Abby Gaines tosses in a few references to how “strong and independent” she is, but she always comes back to depending on her a-hole man.  She may be nice, but she’s also plain stupid.

The only character in the entire book not worthy of automatic hatred is that of Adam’s step-mother.  Still grieving her late husband, she’s a snob but one with a soft spot for her a-hole stepson and a calm and rational head on her shoulders.  The portions of the story in which she is involved are kind of fun as she begins to see that life might still have a few surprises in store for her.

I can’t imagine to whom I might possibly recommend Married by Mistake.  It isn’t romantic, the sex isn’t much fun, the main characters are the worst sorts of stereotypes and the whole thing is more likely to make most readers want to open an artery than swoon with the heady romance of it all.  Really, just avoid it like the plague.