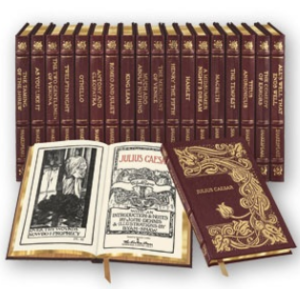 A classical tale of treachery, Julius Caesar concentrates on Marcus Brutus, the great betrayer, as he debates regicide, weighing the balance of his friendship with his fears that Caesar will transition Rome from a republic to a tyrannical monarchy. Brutus, a man of conscious, is beset on all sides by the key conspirators against Caesar namely Caius Cassius who sets false accusations and forged letters in motion to persuade Brutus to join and lead the scheme. Caesar is murdered in the much acclaimed scene (“Et tu, Brutus?”) and when the  final blow is delivered by Brutus, Julius Caesar dies stating, “Then fall, Caesar” revealing that he no longer wants to live after such a treachery and, also, that an era is ending. Afterwards, Brutus and the conspirators stay at the scene of the crime and openly admit their reasons as political only to be overwhelmed by Mark Antony, Caesar’s one remaining supporter, who with an effective speech and the hacked body of Caesar persuade the populace to join  the Battle of Philippi  leading into a traditional Shakespearean ending with most of the main characters dead either through murder or suicide, all their plans thwarted.

Julius Caesar is a play often quoted and has become iconographic. The phrases, “Beware the Ides of March” and “Friends, Romans, Countrymen, lend me your ears” are both taken from different acts within this short but wide ranging play. This was my first time reading Julius Caesar, although not my first introduction to the works of Shakespeare or his historical plays of which this is one. With so much cultural weight and significance attached to it, many first time readers do not realize that the main character is in actuality Brutus and the driving focus of the narrative is his liminal status: to betray Caesar (his friend) or to betray his country (and hence his sense of patriotism and duty.) The driving focus of the narrative is further based on the degenerations among alliances that once made fall apart after the deed reveals the true motives of the conspirators and Brutus’ other friends. Even Mark Antony’s camp is showing fracture signs related to the demise of Caesar. Yet, the focus of a certain odd nobility on the murders is upheld until the last, leaving both Caesar and Brutus to die as respected citizens, heroes even, increasing the sense of complicated tragedy.

A heavily supernatural theme weighs in throughout the story in the form of premonitions and actual visitations of either ghosts or inexplicable heavenly events. The night before Caesar’s death his wife dreams of the Roman’s dipping their hands in Caesar’s blood as the heavens outside are shaken with apocalyptic fury. Caesar even awakens and delivers a soliloquy as he ponders all the strange events his citizens are reporting seeing as the night wears on and what these events bode. Later, Caesar’s ghost returns to foretell doom and destruction. No one is free of spectral intervention and although events remain unchecked, that is solely through the determination of the characters who seek to ignore the signs around them. The women in particular are aware of the signs and, although lessoned by their “woman’s minds,” they are the only characters who fully comport the cycle of doom that has been enacted by the scheme to brutally rid Rome of Ceaser, who is set on and stabbed in the Senate, publicly, before he is crowned.

Julius Caesar is a good play for readers to enter into the world of Shakespeare. Unlike his comedies, there are not excessive references to popular culture of that time, only a few basic historical references. Likewise, the concern over shifting monarchies that was prevalent at the time Shakespeare was penning this play (presumably 1599 – although possibly earlier) informs the paranoia but is not essential knowledge for readers. The language, much feared for its complexity, is fairly easily to comprehend without the help of any compendiums or translations. The plot itself and the themes that it addresses are enough to spark emotional turmoil in the reader, rendering this classic worthy of its status and thoroughly enjoyable.

Note on edition: I read the Easton Press leather-bound edition of this book. There were no page facing notes within my edition other than a glossary at the conclusion of the narrative. To see this version, go to Easton Press’s website and look for the complete works of Shakespeare collection. (http://www.eastonpress.com/prod/2BD/SHAKESPEARE–THE-COMPLETE-WORKS_1993.aspx)