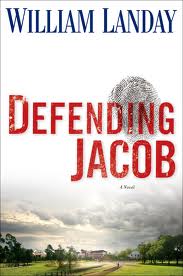 When is a courtroom drama not a courtroom drama? When it’s less about the cat-and-mouse between a brilliant lawyer and a hardened criminal/mob boss/serial killer, and more about the emotional and social repercussions that a criminal accusation brings down upon defendants, their families, and their loved ones. Defending Jacob, by William Landay, is a novel about a sensationalized teen murder trial and its devastating effects on the small, suburban community where it takes place.

Fiftysomething Andy Barber is a respected and well-known assistant district attorney in his cozy New England town; it’s understood that serious and high-profile cases automatically come to him for prosecution. So when local high school student Ben Rifkin is found dead in a public park, having bled to death from multiple stab wounds, it’s only natural that Andy steps up to lead the investigation. Until, that is, Andy’s 14-year-old son Jacob is accused of the murder… and Jacob’s bloody fingerprint is found on the victim’s clothing.

Suddenly, Andy is not only off the case, he’s on indefinite administrative leave, while an ambitious rival attorney in his office snatches the opportunity for a career-making case. His wife, Laurie, is having a meltdown, largely out of frustration that she can’t have a genuine conversation with Andy because he’s so deeply in denial about Jacob’s situation. As their marriage deteriorates under the strain and the murder case heads to trial, Andy is forced to confront the painful, long-buried secret of his past: his biological father, whom he only met once as a child, is a convicted murderer, and violent crime goes back for generations in Andy’s ancestry. Terrified that the pseudo-scientific concept of a “murder gene” (predisposing Jacob for violent tendencies) will sway the jury and lead to a false conviction, Andy reluctantly agrees to meet his father face-to-face in order to disprove the idea of a murder gene and defend his son’s innocence. But if Jacob didn’t kill Ben, then who did?

The story moves forward and backward in time, alternating between the present (where Andy is being questioned by his rival in front of a grand jury) and the past (where Andy reconstructs events with court transcripts). This structure feels convoluted and a bit difficult to follow at first, but makes more sense at the end, although I still don’t think it was completely necessary. As you may have heard, there’s a big twist ending that you definitely won’t see coming; it’s both satisfying and shocking, and worth the often-slow build-up.

Andy is our only source of information, yet throughout the book, we’re never quite sure how reliable a narrator he is, which makes for a teasing logic puzzle. In his telling, Andy comes off as almost impossibly oblivious and deep in denial; at the same time, he’s working hard to show us how his own lies and unethical behavior were merely for the greater good of protecting his son. So which is he — clueless or conniving? By comparison, the other characters feel much less developed; Laurie is nearly a caricature of the weepy, warm-fuzzy psychiatrist, while Jacob is a catatonically unresponsive teenager. But is that who they really are, who Andy genuinely believes them to be, or just how he chooses to portray them for his own purposes? The more Andy talks, the more we realize how much we’re on endlessly shifting narrative ground.

Landay himself began as a prosecutor, so he has experience in his subject. Fortunately, his writing is a cut above the usual courtroom-drama fare; he’s especially skilled at smoothly inserting exposition about the trial process so it fits neatly into the story without feeling forced or awkward. The half-admiring, half-sneering mentor/rival relationship between Andy and his adversary feels complex and convincing, as do the cynical insights about judges and the justice system. Landay does a good job of portraying the stultifying boredom and nightmarish surrealness of being a defendant in a criminal case — perhaps too good, since those parts can be tedious to get through. If you like psychological suspense with a twist, Defending Jacob will keep you turning pages until the end.