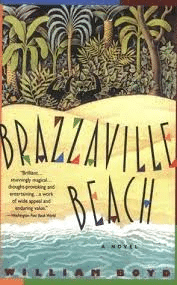 Interweaving mathematical and scientific theorem with the gravity of personal relationships, mental illness, and research in the war torn country of The Republic of Congo, William Boyd’s Brazzaville Beach is a comprehensive literary tale with more technical merit than actual soul. Praised for its comprehensive nature, the rambling narrative is more interested in maintaining a Pulp Fiction like timeline, confusing the reader about actual events and the emotional state of the distant, self-absorbed narrator. Alternating chapters between past and present, Hope Clearwater reveals her monotonous daily life as a chimpanzee researcher on a secluded reserve and mirrors hinted at emotional turmoil with sparse chapters revealing her prior marriage to a mentally ill mathematician/innovator. The ultimate meaning of the novel and the interrelatedness of seemingly random plot threads doesn’t coalesce until near the very ending, when readers finally become invested in the characters and story.

Focusing mainly on Hope’s work with chimpanzees, the novel drags endlessly as chimp behavior and prior behavior/social interactions predominate; Hope remains somehow cold, aloof, and distant, hinting at a shattered heroine too far gone to commune with readers beyond the minutia of daily life and research. The vivacity of the Congo, the steaming woods Hope capers through to keep up with her chimps, aren’t captured within the tale; instead, the main focus of the chapters is changing chimp behavior and Hope’s disturbing discovery of cannibalism and torture in between the northern and southern chimps, echoing the civil war that rages around them, yet doesn’t touch or interfere with their semi-idyllic lifestyle. Hope’s theorem of chimp aggression threatens to undermine her employer’s soon to be released master book of everything known about chimps, leading to internal strife and politics among the researchers. Hope’s charged past, disappointing marriage, and eventual realizations of the broader scope of the Congo conflict and her own life remain strictly backburner items. The meat of the story focuses on a fight between researchers, leaving readers to feel mislead.

The pacing continues, the shift in timeline serving to confuse readers in the name of innovative writing; however, the past chapters dwelling on Hope’s failed marriage and the experimental beginnings of each chapter written in a present first person that correlates some theory of mathematic or quotes to life were the most immersive moments of an otherwise snobbish drama.

The conclusion is like a different novel – the novel Brazzaville Beach should have been. Focusing more on the internal conflicts of Congo, although giving the reader no background of these conflicts (I highly recommend – no, require – some research and reading on the complicated Congo history beforehand. It also should be noted that this novel takes place in the Republic of the Congo and not the Democratic Republic of the Congo

[i.e. DRC].)  The futility of guerilla warfare, the corrupt government (backed by the was against young, untrained, and unprepared soldiers is well evoked, if you’ve done your background political research beforehand (fortunately I had). Hope’s ability to view the circumstances from a complete third party, awakening-to-the-real-world perspective allows a bird’s eye view of peripheral conflict.

Likewise, the simmering story of Hope’s previous marriage is finally revealed, it’s relevance on the plot now an essential experience; the conclusion is stunning, breathtaking in its specificity which makes it more universal. Although meandering around the proverbial trees, the conclusion almost makes the reader glad of having invested the time in a seemingly non-story. After concluding, I did sit back stunned by the last minute redemptive profoundness of the central human conflict that rises to the fore. Nevertheless, this novel won’t be remaining in my overburdened collection but, despite an absorbing conclusion, will gratefully be re-gifted, gladness to say goodbye to chimp behavior and dry chapters which succeed in showing Hope’s dead spirit. Not recommended.