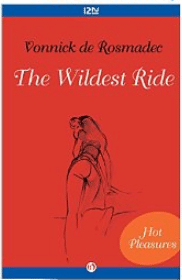 A Quickie Story in a Pleasure Palace

Nineteen-year-old Florence arrives at Ghislaine’s mansion of pleasures for riding lessons only to lose her innocence while discovering her inner passion. Florence, with the flaming red hair, is a source of attraction for the nude maid Mimi and Ghislaine, the mistresses of the pleasure palace. Both seek to vet the new girl who goes from demure to sensual as she gets with the program of the place. After a drawn out encounter with both women, Florence is off to meet Bertrand, the man who runs the stable and will fulfill her wants.

The story itself, although short, really feels like two separate stories. The ménage among the woman and then the encounter with Bertrand are completely different, not transitioning well from one to the other. Nevertheless, both scenes are, while smutty and a little comical in the dirty dialogue at times, pretty hot, although the conclusion with Bertrand and his sudden desire for meanness and sodomy is a certain let down. Likewise, if you happen to be a straight girl (guilty) and want an erotic story that concentrates on just men and women, you’ll be a little disappointed at the time spent with the women and then the short concentration on Bertrand, who really doesn’t come off as the orgasmic catch that the story wants to paint him as. Frankly, the sudden mean talking during the sex, meant to show wantonness and abandonment, gives the story a certain air of sadness that I am sure wasn’t intended. Nevertheless, as far as erotica goes, never a genre where readers really expect much, the writing and the scenarios are fairly well delivered and titillating.

The Wildest Ride delivers a short story with rapid action, realistic graphic sex, and enough foreplay to keep readers involved and intrigued by Florence’s adventure. It’s not great literature, but for erotica this story is actually pretty good. Recommended.