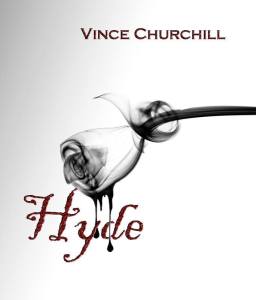 How far would you go to find yourself?

A serial kidnapper and suspected rapist, the elusive Mr. Hyde, is searching for love. Each of his victims disappears for seven days and returns, forever quiet about her experience. Hyde represents the darker side of our nature: lust, lack of control, and a perverted sense of love. When he kidnaps Simone, her twin sister Sam, a cop for LAPD, will do anything to get her sister back safely. She’ll kill if she needs to. She’ll even let herself go and give into Hyde’s lascivious demands. But perhaps the enigmatic madman will show Sam the darker side of herself during this erotic horror journey for redemption, love, and ultimately freedom.

Hyde is darkly entrancing, a story that knows no boundaries and probes into the darker side of love and sexual exploration. The twins themselves, Simone and Sam, have a strange psychic bond whereby Simone can share the intensity of her sexual encounters, which leaves Sam uncomfortable yet oddly curious. Recovering from a past incident, Sam is more comfortable with the routine of a cop, running from herself. Her journey with Hyde will open her eyes to the bad and the good within herself and force a consuming honesty that, while it makes readers uncomfortable in certain instances, also draws us into the complexity of a woman constrained and hiding from herself. The elusive nature of Hyde himself, how he is heard yet never seen, how he orchestrates Sam’s, shall we say, “adventures” adds a Silence of the Lambs type appeal, in that Hyde’s intelligence and manner of saying things mimics Hannibal Lecter’s talks with Clarice (sans liver and fava beans of course.) The combination between a dark villain with insight and a struggling woman serves to set up erotic self-exploration and also ignites the plot on another level: we want to understand and know more about Hyde and the mystery behind his existence.

The novel moves quickly, escalating the sexual tension as Sam discovers the dark side of her own desire while simultaneously attempting to rescue her sister from the clutches of Hyde. The actual erotica, while there are several steamy scenes, is also tailored toward the horror world, presenting some scenes that push the boundaries and make readers uncomfortable, escalating the tension as we worry for Simone and Sam’s safety with Hyde. While he proclaims his intention to do no harm, the dark side of his scheme leaves just enough room for doubt to compel readers.

Hyde concludes with a transformational quality and an unexpected revelation. Readers feel both disturbed and happy for Sam, closing the novel with a titillated, haunted sense. Another enjoyable offering from one of my favorite authors. Highly recommended.

Interested in Vince Churchill? Check out his exclusive author interview with Readers Lane: