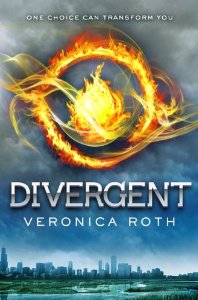 The problem – if I may generalize – with dystopian YA fiction is that authors are always having to come up with nefarious ways for those cruel, authoritarian, out-of-touch adults to RUIN EVERYTHING by keeping teenagers from their rightful happiness. At this stage, all the plausible premises are pretty much taken, so the set-ups are getting fairly outlandish and hard to swallow. Which brings us to the latest example, Divergent (book 1 of the Divergent Trilogy).

This time around, a near-future dystopian Chicago has been fenced off from the greater world and divided into five factions, according to particular virtues: Candor (honesty), Abnegation (selflessness), Dauntless (bravery), Amity (peaceable), and Erudite (intelligent). I guess it immediately pegs me as Erudite to confess that it never stopped annoying me that the factions’ names were different parts of speech: three nouns, two adjectives. Couldn’t it be Honest, Selfless, Dauntless, Peaceful, and Intelligent? ANYWAY.

How it’s supposed to work is that you grow up with your family in the faction you were born into, and on your sixteenth birthday, you take a sort of aptitude test that gives you one or two choices for which faction’s defining trait you display most strongly. On Choosing Day, you go to your permanent faction, which is supposed to be your new, real family; relatives might get to visit a couple of times a year, but inter-faction mixing is discouraged. Your faction also dictates what kinds of job opportunities you get and who you pair off with.

But you will not be surprised to hear that things have gone wrong! Over the past few decades, there has been some… mission creep, and now the five factions are more like Insulting Jerks, Haughty Martyrs, Jackass Thugs, Checked-out Hippies, and Condescending Know-it-alls. The system has splintered society into feuding, hostile groups who can barely stand each other, let alone govern together effectively. But when 16-year-old Beatrice, raised in Abnegation, takes the test, it turns out she’s the one thing that all the factions agree to hate: a Divergent, someone who’s equally divided between all five. It’s as though the Sorting Hat threw up its hands and said, “Ehhh, you’re a Slytherhuffleravendor! Do whatever you want, I guess!”

Beatrice chooses Dauntless, because she’s always secretly despised the shrinking humility of Abnegation, but further challenges await: only the top-ranking candidates pass initiation and are accepted, while everyone else becomes one of the pitiable “factionless” untouchables. Dauntless’s initiation challenges are reckless, violent, and dangerous, and only the strongest — mentally and physically — survive. Beatrice (who has renamed herself Tris) kindles a romance with the taciturn, hunky Four, and it seems she may finally have an ally. But when they stumble upon a secret inter-faction alliance to start a war and seize power, who can they trust to help defeat the evil plot?

Often, the first book in a fantasy trilogy can be a slow starter, as it introduces the rules of its world and establishes the plot. But Divergent, bless its heart, jumps right into the action and does a darn good job of telling you what you need to know as you go, without long, boring digressions or lame devices like chapter-opening “quotations” that are supposedly historical or religious works written by that world’s authors (my least favorite). It’s the kind of book that’s not afraid to kill off fairly central characters to keep the plot moving, which makes for a real page-turner.

On the downside, the premise really is ridiculously implausible (although, I suppose, the kind of thing a teenager would identify with). While it seems to be set in the near future, there’s no explanation of how we got from present-day Chicago to this fenced-off, post-war wasteland; presumably that’s coming as war expands Tris’s understanding of her world. Currently, Tris is annoyingly dumb and sheltered — she’s the biggest drag on the story’s forward motion because she’s so slow to put things together. And there is some fat-shaming and fetishizing of taut, athletic bods, both by the cruel jocks of Dauntless and by Tris herself, which is not a message I like to see in books aimed at teen readers. It was equally sad that the Erudites were caricatured as pudgy, vain, and insufferably smug.

Mostly, though, this is a fun, action-packed adventure that will captivate boys and girls alike with its strong female protagonist and heart-racing derring-do (jumping off trains! climbing Ferris wheels!). And there are ultimately some good messages about what courage really means, and how all the virtues are important in making well-rounded human beings. I’m interested enough to keep going with book 2, Insurgent.