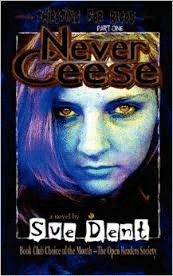 Do Two Wrongs Make a Right?

Bound together on a final mission, a vampire and a werewolf go in search of recovering their souls at the behest of an old, dying friend who long ago escaped her curse of vampirism through her unyielding faith.  Mixing lore with religion, Sue Dent brings a modern spin to the vampire/werewolf curse. The old familiar items of holy objects being repellent (including holy ground), wolf’s bane, silver, etc. are still there but new, enticing additions to the myth are what truly keeps readers turning pages and rooting for our cursed hero and heroine. The inability to feel true emotion, the inability to pray or call upon God, the inability to experience physical intimacy, the constantly pervading sense of a monstrous side wanting dominance, and the fear of dying cursed meaning eternal damnation, wear heavily upon both Richard (vampire) and Ceese (werewolf) as they embark on a journey that Richard, who has tried before, predicts will be fruitless. Along the way, surrounded by a metropolis of people, they must closely control their monstrous side because to curse another, even accidentally, will end their chance for release. Compelling and original, the story adds layers of history and complexity to both characters who begin the journey hating one another and end it in discovery.

The addition of religion, the idea of two supposedly evil “cursed” creatures seeking redemption, particularly Ceese who despite the agony brought on by her curse forces herself to pray and remember scripture, is a new and appealing twist which adds realism to the stories of lore. Likewise, the inability to feel emotions, yet the echoing of remembrance, enables the characters who supposedly can’t feel enough to trudge the edges of their curse and embrace emotion and love for their dying friend, Penny, whose own faith was strong enough to rescue her and feels that the same chance will be open to both Richard and Ceese, if only they work together. Penny’s reasoning is unclear, but her emphatic nature and death bed request binds the werewolf and vampire to one another, and in love of her memory, they seek out Cassie, Penny’s distant relation who believes that she holds the key to lifting the curse. Unfortunately, someone else is in on Cassie’s secret.

The novel is propelled by both characterization and tension. Ceese and Richard provide comic relief, particularly Ceese who has just come out of wolf form after 200 years, as they acquaint themselves with the city and modern life, simultaneously trading insults all the way. Both characters are richly drawn, vivid in the uniqueness of their cursed yet oddly righteous nature and their bravery at fighting the nearly incontrollable monster within. Ceese, in particular, became my favorite, but all the characters that interact within this bizarre yet believable world were enjoyable and, if not always empathetic, always realistic and engaging.

The story develops Richard and Ceese without losing momentum, keeping the action, adventure, and turmoil evident in every chapter – sort of a Dark Shadows like experience merged with the pacing of a thriller. Our characters’ safety, plus the possibility of having such strong curses lifted, keeps the tension high and the reader glued to the pages.

Since this is the first novel in the three-part Thirsting for Blood series, I was concerned that the ending would not satisfy my desire to have certain questions answered and that perhaps, the characters’ struggles would be carried on too long. This was not the case and Never Ceese delivered a gut-wrenching conclusion that gave enough to set up a sequel that readers want to leave without leaving an unappealing cliffhanger ending. The combination of Christian religion, vampires, and werewolves created a unique blend that advocates strong faith while presenting true trial, satisfying the horror lover’s needs and giving the tale a touch of humanity that takes it deeper, creating a story and a moral that are both engrossing and satisfying. I will certainly return to this world for the second sampling of the Thirsting for Blood series! Highly recommended.