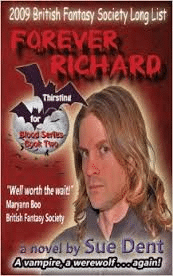 The Ties that Bind: Un-cursed and yet Lost

Released from their curses by their faith in God, Richard (former vampire) and Ceese (former werewolf) struggle to find their moorings in this new life and come to terms with ancient secrets. When Dr. Henderson, out for blood literally now, resurfaces as a vampire and continues conducting his unethical experiments to breed the ultimate supernatural creature, he curses Josh, Rodney’s drug addicted friend, who discovers that life as a vampire is just another difficult addiction that he may not be able to handle. In an attempt to help him lift his own curse, Rodney, Cassie, Ceese, and Richard return to England only to discover that the werewolf who cursed Ceese won’t let go of his thrall and that those who should be dead are miraculously and strangely alive with new secrets and soul churning turmoil. In this ever changing world, Ceese finds her redemption more than she can handle and Richard discovers that getting what you wished for isn’t always something that is easy or understandable. Meanwhile, the danger of evil forces hoovers around our characters as they grope their way to faith and understanding in a world where everything is shadows of grey and home isn’t always an easily distinguished thing.

Following a Dark Shadows motif, the epic continues. Never Ceeseleft readers with enough of a cliff hanger to keep us curious and to forge a deep connection to all the characters yet still satisfying the ultimate questions. What more could possibly happen to be that significant after the curses are erased? Forever Richard delivers the surprising answer, proving to be even more of an emotional roller coaster than the first book in the Thirsting for Blood series. The introduction of Penelope an Meredith at the conclusion of Never Ceese gives readers a hint of the trials and questions to come, but the multifaceted plot soon introduces  a mélange of tangled threads including everything from faith, desire, loyalty, Stockholm syndrome, and of course the epic battle between human fallibility and trusting in God, creating a realistic supernatural story that grabs readers by the throats and has us all believing in vampires and all the things that go bump in the night. Not to mention, I had to buy a werewolf plushie to cuddle while reading because, darn, this is just good stuff.

It’s a difficult line to balance – so many complicated supernatural implications and otherworldly rules, especially author Sue Dent’s recreation of vampire and werewolf lore. Anyone who has attempted to write something on this scale (guilty) will soon release that the line between the gripping and the absurd is obscure and difficult to pull off.  The introduction of new characters and scenarios had me concerned, but soon that worry dissipated as the story proved even better than the first novel which I fell in love with. The characters are presented with turmoil from all sides and while the undeniable humor of Rodney and the conversational writing keeps it real and lifts the tale, the danger and turmoil is viscerally felt. The new development between Penelope and Cassie, while I cannot divulge much, is an interesting personal angle which adds to the dynamics of the story.

With so many plot threads and schemes going on at once, Forever Richard manages to attain just the right balance and keep the pace moving along while introducing more elements which, hopefully, will be divulged in Cyn No More, the next novel in the Thirsting for Blood Series.  Sequels, something I am usually wary of (for good reason – don’t get me going) almost never come up to the same level as the first book, much less surpass a novel that was already a favorite. I sat back to enjoy Forever Richard but maintained my lovable cynical nature only to be pleasantly surprised as the story upped the ante from the previous tale and evolved into a whirlwind finale which ends on a major cliff hanger that had me ripping out hair and desperate to buy the, as of yet, unpublished continuation which just better come out soon because these characters have become family and friends. Any followers of Dark Shadows who enjoy lighter horror mixed with realism and interpersonal elements along with a story that keeps going will instantly fall in love with this series and, I dare say, cuddle up with a stuffed werewolf named Ceese while they wait for the next installment. Highly recommended!

Other Books By Sue Dent: