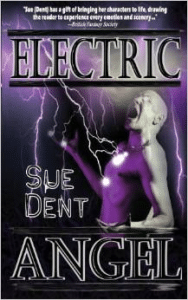 Anna Chadwick, pregnant with twin boys, is dying of cancer, and with her, everything that ever mattered – her children. Running away into a stormy night, Anna receives the answer to her prayer when an electrical being descends from the sky and makes a deal. Anna will die, allowing the entity to use her body as a host. In return, her one child will live to be born and her stillborn baby will host the electrical being’s child. However, when an unscrupulous man finds out about the new Anna and her abilities, a group of trained thugs seeks her and her children for their own profit. Thrown into the mix is Zachary, Anna’s husband, and his traitorous friend Reg who in a race against time are trying to find the two boys many years later and rescue them from the fate of their mother.

Electric Angel keeps the voltage and the tension high as it starts in the middle with Anna’s mysterious deal and her calm acceptance of death and the Lord’s will in sending the electric being to her. The religious aspects of the story allow readers to be both terrified for Anna and sympathetic to the being, mostly good, who comes into the world of the tale with little knowledge and no malice.  The emotional effects of the revelation on Zachery and his reaction keep the tale real and while the pain of loss and the horror of concealment are very real, the “monster” as it were, is certainly a heroine we can root for as well, producing a complicated tale about appearances, good and evil, and giving a distinctly Christian spin to the horror genre without losing any of the spooky supernatural intrigue. Did I mention that there are some cool lightning storms? It’s practically electrifying!

Having read Sue Dent’s prior books, part of the Thirsting for Blood series, Never Ceese and Forever Richard, I was already familiar with the writer’s distinctive, quirky approach: the merging of horror and the supernatural without becoming morbid or hopeless. Electric Angel presents the entities as not human but full of humanity – similar to the Dark Shadows feel of a world of remorseful supernatural beings who sometimes use their powers to interfere, and help, in the lives of the hapless around them.

Anna and her sizzling son (haha, are you sick of the puns yet?) are still quite the enigma, however, and while we suspect that they are indeed good, they are different and do not fully understand or operate in the complex world around them. They are further weakened by a need to charge which makes them vulnerable and at the whims of humans who do not understand them and one who is, in particular, vitriolic. This leads to plenty of confrontations and some shocking sequences. Ok, ok. I’ll stop with the electrifying jokes.

The powers of the beings and the way they interact reminds me of the complex world of Dragonlance where the “others” were just as well drawn as the humans with a world their own which requires order and consistency to make their abilities believable and relatable. This is done very well and readers are brought into the tale both from the perspective of enjoyable narrative/characterization and compelling imagination and creation of a world that mirrors our own.

The conclusion ties up some loose threads and gives readers the confrontation we had been seeking – if not the complete answer. Half way before a cliff hanger (the next book will be Electric Zombie) and a resolution, Electric Angel leaves readers satisfied and craving for more – the perfect way to conclude a book in the series without frustrating or playing with readers. I highly anticipate my next foray into this titillating world and these shattered, yet strong characters. Highly recommended.