Scurvy: How a Surgeon, a Mariner, and a Gentlemen Solved the Greatest Medical Mystery of the Age of Sail

Scurvaceous Sailors and a Medical Mystery 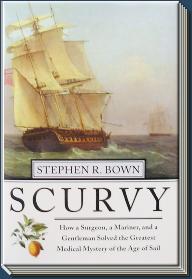 I love everything about independent bookstore book clubs except attending them. I’ll follow the monthly selections, dutifully check them out from the library and read along, finish the book in time for the meeting… and then not go. I like to think of it as my own personal at-home book club, where I can hog all the snacks and I don’t have to wear pants. Anyway, that’s how I ended up reading Scurvy: How a Surgeon, a Mariner, and a Gentlemen Solved the Greatest Medical Mystery of the Age of Sail, as suggested by Ada’s Books’ nonfiction book club.

Right? If you know literally one thing about scurvy, it is that citrus fruit cures it. But that simple piece of information puts you far ahead of naval commanders all the way into the 19th century — and it may even have played a role in the unfolding of world history. Scurvy is vitamin C deficiency, and it’s been with us for millennia, wherever humans were deprived of this important nutrient for extended periods of time. But only with the development of immense warships, meant to travel the world or defend a country’s coastline for months on end without stopping for supplies, did scurvy become a national defense crisis. Ships would routinely be crammed full of hundreds of extra men, in the expectation that half or more of them would perish from scurvy. As you might expect, sanitation and nutrition standards on board were appalling in general, but with science in its infancy, the importance of nutrients (and what made foods nourishing and sustaining) was simply not understood. There was lots of talk of “humours” and administering of ineffective treatments like vinegar and whippings, but scurvy unsurprisingly persisted.

James Lind, an 18th-century surgeon’s mate in Britain’s Royal Navy, led the way with pioneering research that included the world’s first recorded clinical trials, and in 1747 he demonstrated that citrus was far and away the most effective, often miraculous, scurvy cure. But because he couldn’t explain why it worked, his findings didn’t carry much weight in the academic community and his conclusions were disregarded. Decades later, Gilbert Blaine, a gentleman physician, rediscovered the citrus cure, but he did a much better job of working his social connections and persuasively showing that experienced, healthy sailors were valuable assets worth maintaining. The author argues that the vitamin-C-enhanced British navy was able to defeat Napoleon at Trafalgar because they were healthier than the French — and that their scurvy-riddled predecessors may have lost the American Revolution due to a lack of vitamin C.

The most amazing thing I learned was that the citrus cure was repeatedly discovered over the centuries, and known to be effective. Yet each time it was pushed aside, due to bureaucratic incompetence, expense, or the impracticality of long-term preservation and storage. (I also learned that the adjectival form of “scurvy” is “scorbutic,” but I still prefer “scurvaceous” and will continue to use it.)

This is a really fun, and often rather graphic, book about an interesting chapter in European history. Get ready for some horrifying descriptions of shipboard conditions in general, and food preparation in particular. (One way to get through this is what I called the Scurvy Drinking Game: every time you read the phrase “spongy gums,” take a drink.)