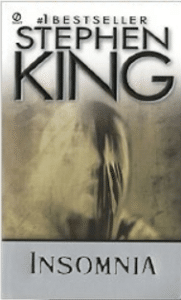 A Slow Read to Cure Insomnia

Ralph Roberts, recently windowed septuagenarian, can’t sleep. He hasn’t been able to sleep for a very long time, as a matter of fact, and as shatteringly real dreams wake him from the few hours he does get, he starts to see a whole new side to the quiet town of Derry. Through his insomnia, he witnesses a new world where auras glow around people and something like balloon strings rise from their heads into the skies – their life forces and souls. Meanwhile, political turmoil over Woman Care, an abortion clinic within the town that also provides woman related services such as counseling and rescue from abusive spouses, escalates as Ralph’s formerly sweet natured neighbor Ed leads a radical group of pro-life activists. The insights of insomnia and the growing turmoil over the abortion issue merge, leading Ralph and his friend Lois to discover the meanings of unseen forces in Derry and to eventually participate directly in the battle between good and evil.

A sprawling 916 pages (21 discs for the audio book, clocking in at just over 25 hours of reading), Insomnia is a slow paced, character driven read that could effectively be halved and split into several narratives without losing the actual verve which captivates readers way passed the half way mark. A Stephen King fan and a determined reader, I kept listening to the unabridged audio recording, racing through discs to just get it over with already. Ralph’s torrent of stereotypical old-man complaints and his crotchety doggedness speak to a presumption of age that is neither unique nor captivating. The insomnia and its gradual build up happens almost real time as we spend months with Ralph, watching him worry about forgetting soup bottles and expostulate on his pro-choice position, seemingly with no end in sight or even a particular point to the narrative. This technique does succeed in capturing the life-like atmosphere of the novel and putting readers into the small town life of Derry, showing a pulsing current of barely perceived paranoia under the service. And it’s good writing, well done writing even. It’s just boring.

This being the first political Stephen King novel I have encounter, although research tells me it is not the only one, the debate over abortion itself takes a large amount of page space, presenting stereotypical figures on both sides who serve as mouth pieces. The anger and righteousness felt through the tenor of the piece, which represents anyone pro-life as a murderous simpleton and anyone pro-choice as a generous saint, feels stale and a little too much like a talk show. Of course, when you have any political rhetoric in your literature, it is bound to offend audiences on the other side (yes, you guessed it, pro-life person here). That’s not a reason to keep politics from a novel, however. Yet, if the politics feel forced, the situations and arguments hackneyed, and the entire thing doesn’t really play into the plot of the novel itself, but just hangs out there in full red hearing mode, well . . . then you have a receipt for a bored audience regardless of what side of the issue they support.

And so, aimlessly, there is a fight between the pro-life and the pro-choice groups and a lot of sleepless nights listening to Ralph ramble about his feelings, fears, and intuitions. It’s difficult for even the most adamant King fan to get stuck into the narrative, until the appearance of the Little Doctors at just around disc eleven when the writing shifts and becomes a powerful narrative.

Examining the structure of the world, Insomnia represents humans as short-timers (i.e. short lived creatures), with tiers of creatures rising above them (long-timers and then immortal like beings who are, of course, all-timers) and how these groups interact, one with the other. The focus of the plot becomes deep, questions almost religious in nature following as Ralph attempts to expand his understand to comprise a universe where even the long-timers are limited in their knowledge and understanding of the grander scheme of things, including the true ramifications of death. It’s an eclectic idea, and once the long-timers appear with their proposition, Ralph and Lois begin interacting with beings far older, far wiser, and yet limited, allowing for some conversations that truly are exciting and also for several breathlessly tense action scenes that shows King truly is the master of the horror genre. The approach is almost literary, and readers will find themselves slowing down, absorbing, even forgiving the previous first half of the novel. Insomnia is worth holding on through the dry and unnecessarily long beginning just to spend time immersed in the ideas that it represents later on and, of course, the action.

If the first half of the novel were carved away, and then elegantly disposed of, Insomnia would, no doubt, be ranked among King’s finest. Even with the pacing issues, the novel haunts readers days after finishing the final disc, the themes and the inquisitive nature of the narrative leaving us with new thoughts on life, death, and how it could possibly all tie together. However, I was close several times to just stopping the disc and popping in an Agatha Christie instead. I’m glad that I stalwartly continued, since the experience of reading this book was unforgettable, yet I caution readers not to start at this tale. In the end, Insomnia is worth reading, but the beginning material of the book is boring, long-winded, and seemingly random. Recommended with caution.

*A Note on the Audio CD: I listened to the unabridged audio recording read by Eli Wallach; for the most part, the recording was well done. The sound effects were sometimes sublime and at other times simply ridiculous or too theatrical. One sound effect in particular has the resonance of a bad case of flatulence and when this tune starts playing, it instantly distracts readers from the serious nature of what is occurring. On the other hand, there is a segment of melancholy yet beautiful music that captures the transcendental moments and makes the experience sublime, making the audio version a pretty mixed bag. Wallach does well reading, emphasizing words and giving each character a unique voice and tenor . . . yet, his Maine accent and even the crotchety old man sound that compliments Ralph’s personality, wasn’t personally appealing to me.