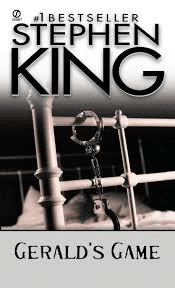 How Far Are You Willing to Go to Survive?

Jessie Burlingame is a good wife, an unobtrusive woman who caters to her husband’s waning desires and, at least on the outside, leads a normal life. Except really, does she? Taking a day off work to drive to their remote Summer House on Dark Score Lake, her kinky attorney husband once again takes Jesse’s handcuffs, restrained against their bed. This is when the good wife dies and Jesse, awakening to the control and manipulation of her husband correlates the darkness in him with a long ago incident she has blotted from her memory. When the argument escalates and Gerald ends up accidentally dead, Jesse is bound to the bed, alone in a wilderness where everyone else has already gone home for the summer. She’s alone with all her thoughts, all her fears, and all those pesky voices in her head that force her to remember everything. The stakes are upped as time passes and the needs of the body weaken Jesse. When a visitor, either specter or man, starts to appear nightly, Jesse realizes that her time is up and she must confront herself and find her will to survive. The good wife, however, might just have to die.

In one of King’s darkest works, Gerald’s Game confronts the psychology of the victim and the specific issues between women and the male need for domination. It’s certainly a brave work, and had you told me that a book written by a man about the struggles of women, specifically the way they are used, objectified, and belittled, I would have shrugged it off as a politically correct attempt to formulate something that the author, by very fact of gender, would not be able to fully comprehend. Instead, King creates for us a very real woman and Gerald’s Game utilizes spooky atmosphere to advance self-consciousness, making the compelling nature of this story not so much the physical action (although it’s certainly up to King’s standards of the horrific) but about the mind and how events and the manner in which we react to them in some essence seals our personality and engages all the denial mechanisms of our minds.

Having a peruse through the old reviews of this book, a King novel from 1992 (honestly, doesn’t that seem recent!?), I was quite surprised at the negative reactions this book received. Specifically, the accusations of sensationalism akin to the splatter-punk genre (yes, a genre I have read) and the “over the top” situations of the character and of her mind’s reactions. Seriously? I wonder if I read the same novel.

I tend to pick up books, especially by authors whom I can trust, without reading the back cover (gives an extra little surprise – I highly recommend it.)  All I knew going into this novel was that a woman was handcuffed to a bed, her husband having died in some manner. I was intrigued to see where King would go with a story that, by the very nature of it, cannot go very far. The introspective and the imaginative, combined with an atmosphere that is utterly terrifying with that forlorn, lonely quality of early mornings and late nights, wove together to create an introspective novel where there is a lot of action. It’s not the traditional action of a character moving and doing things (at least not consistently), although King does implement the character’s very immovability as a struggle which she must overcome to achieve basic tasks (reaching the glass of water by the bed) making each movement we take for granted in a day poignantly tense. This further creates the atmosphere and binds us along with Jesse in a claustrophobic environment where all the little things suddenly matter; where all we care about is reaching that glass of water; where the world has just broken down to the small items of survival.

The mental tension of the piece is active in the implementation of multiple voices within the character’s head who effectively represent different aspects of her personality and awareness. I know, I know. Had I been told about this from the onset I would have either accounted that maneuver as incredibly lame and impossible to pull off or as an interesting glance into the inner workings of a lunatic on the verge of losing all forms of sanity.  It proved to be neither. Instead, we hear a voice from the heart, sometimes confused, sometimes angry, sometimes hurt, sometimes even goading; Jesse becomes one of the most well drawn characters in fiction and this internal dialogue makes her real, relatable, and deeply tragic. Readers are grounded in this world and those items which some reviewers accuse as “over the top” come off not only as believable but as almost inevitable. Effectively, it’s the worst day ever and we’re along for the ride and believing every moment of it so vividly, that we think that man with the bag of human skin and the glistening bones will appear in the shadows of our own bedrooms late at night.

The second half of the internal struggle concentrates on memory which gradually but completely reveals the details of Jesse’s molestation by a man she idealized, her father. This is also where the book gets many critical slams (Amazon rating is a staggering low three stars.) Yes, it’s explicit but no, it is not usurious or sensational for the mere purpose of shocking readers with just how far King can go when he wants to disturb us (which is, admittedly, very far.) The event is suffocating in its intensity and it evokes the feelings and emotions we as readers are afraid of and want to avoid, but it evokes them with a purpose which, in the end, is weirdly positive (well, for King anyway.) It’s necessary to understand why Jesse married such a man and how she ended up handcuffed anyway and it’s also necessary to see where she comes from so we understand how far she will have to go to survive those brutal 28 hours.

The ending has an unusual twist, almost adding a second story to the tale. For me, this wasn’t the greatest aspect of the novel since the side story of the bone man, while essential, goes too long and becomes too graphic, loosing focus on Jesse and turn even the most iron of stomachs.

Evoking the claustrophobia and struggle of Cujo, Gerald’s Game increases the disturbing brutality crafting a tale that is atmospheric and ultimately disturbing. It will upset readers, proving to be one of those stories that follows you around, even during the daylight hours, stalking the dark corners of your home, yet Jesse becomes so integral to us that we cannot regret the agony of experiencing her story. Highly recommended.

(Note on the Audio book edition) I listened to the unabridged reading by Lindsay Crouse and feel that this is the only way to truly immerse in the atmosphere that is Gerald’s Game. Crouse’s manifestation of tone to convey different voices, Jesse’s panic, Jesse’s fright, and even the room around our prone heroine grabs readers and forces them into the tale. In many ways, Crouse’s voice becomes Jesse, and the experience gains intimacy. The additional sound effects enhance the atmosphere.