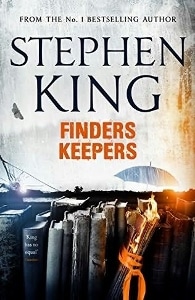 I do believe that Stephen King is in the process of writing what is as close as he will ever (ever) get to a cozy mystery series. How weird is that? Granted, in his world, cozy mysteries have a lot of horrible murders and graphic violence, but Finders Keepers, the second in the series (following Mr. Mercedes) has a lot of the qualities we’ve come to expect from our tamer cozy cousins.

Finders Keepers begins with a murder. Morris Bellamy has been obsessed with his favorite author for some time, but was so disappointed in how the man chose to end his trilogy that Morris became an outraged obsessive. Thus, murder. And theft. But it’s hard to move what he stole so he stashes it in what seems to be an absolutely safe, secret place.

Flash forward 30 years and we meet Peter Saubers. Saubers happens to live in the former abode of one Morris Bellamy – not that he knows that or would care if he did. He cares about his family, which is in the process of falling apart. His father was badly injured when he was run down at a job fair by a guy driving a stolen Mercedes. Well, that rings some bells, doesn’t it? When Saubers comes into some unexpected money, he uses it to help his struggling family and all is well – until it isn’t.

Enter one Bill Hodges, a formerly hefty former detective, now running an operation called Finders Keepers. Bill does things like repo cars and planes and generally deals with bad guys for other guys. He isn’t a PI, but he is still an investigator. Of sorts. Bill is enlisted to help Peter Saubers out of a particularly sticky jam.

So in addition to gruesome murder and mayhem, we have our recurring character and his quirky band of misfits going around and not really legally solving crimes. And voila! A Stephen King cozy.

The question, though, is the same as always – is it any good? Well, of course it is. King’s characters are always good, and his protagonist – Saubers – and antagonist – Bellamy – are both classic King. Really well developed, really well written, and on a collision course of good vs. evil.

The weak link here is in the cozy aspect of the story – and that’s Bill Hodges and his pals. Sadly, they simply are not all that interesting. So unlike a traditional cozy where you would read the next installment to find out what happens in the lives of the recurring characters, you’ll be much more likely to read more to find out what kind of victims and villains King can throw at them.

That’s not a bad thing, but it is something to be aware of – Bill Hodges is undoubtedly going to reappear, and he’s unlikely to get more interesting. But his cases? That’s where the meat of these books lies. I don’t mind putting up with Hodges to get some vintage King bad guys.

But overall, it isn’t one of King’s stronger outings. Still definitely worth a read, but only 3 stars in the Kingiverse.