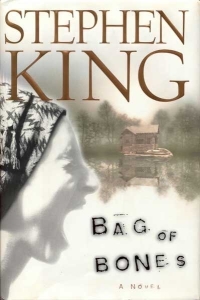 Captivating me with a sinister movie preview back in the mists of time (ok, college), Bag of Bones has long been a Stephen King novel that I wanted to sample. Left alone to do some house sitting over the holidays, I had plenty of time to crank the horror movie carnage and to delve into some good, old-style original Stephen King. Only Bag of Bones remained elusive, my library carrying neither the movie nor the book, and Amazon Instant Video likewise disappointing. Resting before my final semester of grad school, I spied an old, beaten-up copy of the novel at a favorite used book store, bought it immediately, and finally settled for a read.

Essentially, Bag of Bones is a ghost story, at least on the surface, and a love story underneath commingling issues of race, identity, sins-of-the-fathers, sacrifice, betrayal, revenge, longing, and finally love – love of spouses and love of children. It’s a complicated mélange of a tale, aspiring to the real life atmosphere that pervades most of King’s work while mixing in an undertow of worlds unseen, subterranean, yet touching our own.

The story starts when Mike Noonan, fairly successful V.C. Andrew’s type novelist, loses his young wife, Jo, to a sudden brain aneurysm. Plagued by loss, Mike suffers writer’s block and nightmares, vivid dreams that call him back to Sara Laughs, his country house beside a sinister lake in the depths of the Maine woods. Finally relenting, Mike returns to this home. At first there are many suspicious bumps in the night, but when his writing gets back on track and he meets Mattie, a young widower with a daughter, both of who are disturbed by the malicious Max Devore, Mike becomes enmeshed in some long time business that’s just about to get more complicated and a lot worse before it gets better – if it ever gets better.

The majority of the story is reminiscent of King’s book Insomnia, where more than the first half of the tale is dedicated to characterization and a steadily seeping sense of paranoia that undergirds seemingly normal interactions and events. While Insomnia was a slow ride, after the half-way point all the threads tied together and the story rocketed forward into the supernatural realm where the high stakes were only dwarfed by the level of human anguish and beautiful poignancy. Bag of Bones, despite its movie follow up and new mini-series, plus all the lovely reviewer blurb on Amazon, didn’t have the same pizzazz or ability to pull itself out of a mire of unimportant character building scenes. Sure, we know what Mike feels like when he tries to write, how he talks to his lawyer, even his complexity of feelings for Mattie, yet the small details do not build a sympathetic or even realistic whole. The story remains submerged.

Delving off into child custody and a strange battle which is seemingly unrelated to the story a deus ex machina turn in the end haphazardly strings together loose ties instead of allowing the narrative to stair step itself from the low to the high. It’s just a confusing mess that really had some grand aspirations – time travel, other worldly forces, the lasting bonds of love (ah, Stephen King, you are quite the romantic, aren’t you?), and the effects of race on a small bigoted community and the woman who refused to give into the rules of her time. The scope is marvelous, even epic, and the qualities of a great novel are certainly there in the social commentary and the complexity of good and evil and the overlapping nature of love. The key here is the phrase almost there, because in Bag of Bones while we may glimpse things beyond the pale, we never actually go over to the other side into that land of great literature. Instead, there is a murky sense of something overwhelming having almost come through, yet turned back, afraid or confused, at the last moment.

Don’t believe me? Let me explain further. Bag of Bones is 752 pages. Seven-hundred-and-fifty-two. That’s right. Let that sink in. And way more than half (closer to two thirds) of the narrative could effectively be deleted without losing focus on the story at all.

The conclusion, where events finally start to culminate, further disappoints. After being in the land of “things go bump in the night” for so long, readers are relieved to see some ghostly action and have a final confrontation – except it’s a false sense of relief. The initial crime that has caused the poltergeist like visitation is gruesome, more horrible than most King novels, and it does give the readers a strong sense of the why behind the generations of actions, yet ultimately the tie between the original event and Mike remains vague. The ghost herself, and her hinted at bonding with some other being, are never fully extrapolated, and the manner of banishing her remains inexplicable and too easy. How can you banish a creature that doesn’t exist, especially using physicality when spirits exist more in the ephemeral? The action speeds up, and there are some thrilling moments, but in the end readers sit back and realize we never did entirely understand just what was happening, how, and why. Bag of Bones isn’t a bad novel by any means, but it’s not the immortal monument to King’s genius that some are claiming. It’s entertaining but forgettable, and certainly superseded by other King novels. The most interesting and captivating premise is mostly for the lone writers in the group who will find King’s talk of creative writing inspiring, sympathetic, edgy, and realistic. As an author I responded; as a reader, not so much.