Shopaholic to the Stars 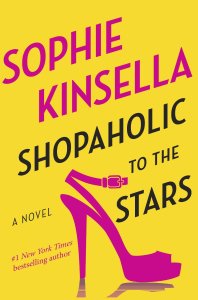 Shopaholic Goes to Hollywood to Jump the Shark

Sophia, Kinsella, queen of chick-lit drama merged with sidesplitting comedy and author of the ever popular (and movie-ized Shopaholic series) hasn’t penned another adventure with Becky Brandon (nee Bloomwood) since late 2010. Our quirky, spend-aholic, good-as-gold, lovable character has been on the fritz in the last several books, especially Mini Shopaholic. Becky was transitioned from a life-like comically endearing figure to a scatter-brained, childish facsimile of her glory days. Mini Shopaholic left me enervated and disappointed. I forgot about the series, only recently re-discovering Kinsella through her new novel, the inspired laugh-out-loud Wedding Night, and checking out her other stand-alone fiction novels (namely Twenties Girl and I’ve Got Your Number) from my library. When I saw Shopaholic to the Stars up for pre-order, I pounced and did the impossible: I bought the hardcover new version. Considering that I have over 2,000 hard copy books and little room, I’ve long since switched to the e-reader world to save space, but all Kinsella’s books decorate my shelves in brand new hardcover glory. This was not to be an exception.

Following the cliff-hanger, no resolution ending that broke the spell in Mini Shopaholic, Luke and Becky, followed shortly afterward by a star struck Suze and a dispirited Tarkie, arrive in LA to walk the red carpet, hob nob with the stars, and launch Becky’s career as a famous stylist for Luke’s new client, the flighty actress Sage Seymour. As Becky tries to make her way into showbiz, she stays at a fancy resort to work on her “shopping addiction” and spread her web of influence, eventually leading Tarkie into a cult and maxing out her cards on t-shirts with inspirational slogans and books about not shopping. Meanwhile, Alicia Bitch-Long-Legs returns and makes a sudden and deep friendship with Suze while Becky’s dad runs amok trying to “set things right.” Becky gets body guards, Elinor appears, and the marriage further fractures. It’s 497 pages of tightly packed . . . waiting for . . . something to happen . . . that doesn’t . . . and random events. Oh yeah, and there are weird, unrelated letters interspersed between chapters.

Re-hashing the familiar plot (which was done a lot better) of I Love Lucy, Shopaholic to the Stars effectively follows a selfish woman (Becky) as she tries to use her husband’s career (sound like Ricky and the nightclub anyone?) to get into “show business.” Becky continues with her lobotomized state established in the previous book and acts, well, not exactly like a child – something more ludicrous and unbelievable even, like those low budget movies that try to be funny by having the characters feel and say absurd, over wrought emotions. Some of the situations, in and of themselves, are promisingly amusing (the Golden Peace resort for Becky to learn meditation, inner peace, and stop shopping), yet the fulfillment of the humor just isn’t there. It falls flat. It feels like Kinsella, normally so inspired by the muse, is trying too hard instead of just letting the genius flow. The characters are strained, the situations blown up too much, the emotions over-hashed and re-hashed, the entire atmosphere of the novel coming off like something that the author struggled to smack onto the page and then, exhausted, didn’t return to refine.

Unlike Mini Shopaholic, however, there are several conflicts that arise during this novel that make the stakes higher. While we (the fans) are shaking our heads knowing that Kinsella can do so much better, the previous charm of her characterization and the world she created still calls to us. We care what happens. I’m not sure if this is because of my prior attachment to the characters/series or if a bit of that magic is still left in this book.

Suze’s betrayal with Alicia is interesting – yet doesn’t feel properly set up or explained. Still, we are intrigued enough to read further, to want resolution and confrontation. The story involving Becky’s dad is somewhat ominous and draws readers into an undercurrent that feels serious and echoes the discovery of Becky’s lost sister in previous books. Suze and Tarkie . . . well, that one is just too outlandish. Tarkie in a cult? Nah. And the entire Sage/stars/getting to the top/getting in the movies/stylist theme – only interesting if you are enamored of Hollywood and the life of the stars. I’m not, so it personally did nothing for me and, once again, it felt like the story was trying so hard that everything turned wooden. Still, there are some decent plot threads that come through and keep us turning pages even as we shake our heads and talk about the good old days.

And then – there’s the ending. Yet another cliff-hanger, only worse than the one previously delivered in Mini Shopaholic which had quite a few vocal fans enraged. After nearly 500 pages we expect some sort of resolution to all of these threads. Instead, there is a hurried climax with Becky’s “career” and then the other problems – a missing Tarkie, her missing father, Alicia, etc. are set up as the characters prepare to seek answers and drive to LA. Then, the next page simply states something to the effect that Becky is coming back soon. Really!? After reading nearly 500 pages. Give me my $20 back right now.

Shopaholic to the Stars is just further confirmation that the Becky series has seriously jumped the shark. It’s still a “must read” for fans who feel compelled to find out what happens (yours truly), but certainly not a good starting place for new readers and something that casual readers of this series should skip. Oh, and save money. Don’t bother with the hardcover edition.