Unconquered, The: In Search of the Amazon’s Last Uncontacted Tribes 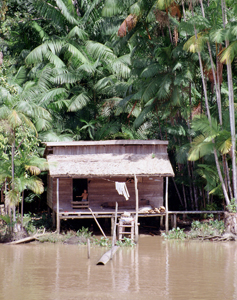 Generally speaking, I’d be up for visiting most parts of the planet (excluding the ones that aren’t currently at war or experiencing a natural disaster). But I think I might have to draw the line at the Amazon jungle after reading Scott Wallace’s harrowing nonfiction account, The Unconquered: In Search of the Amazon’s Last Uncontacted Tribes. While most people wouldn’t want to endure the hardships, starvation, and murderous flora and fauna that Wallace encountered on a seemingly hourly basis during his jungle trek, it does make for a thrilling tale of high adventure, best enjoyed from the comfort of a cozy couch. Preferably with a snack in easy reach.

Because of his extensive journalistic experience writing about Brazil and the Amazon, Wallace gets a National Geographic assignment to write about Sydney Possuelo, a Brazilian government agent who acts as a liaison between the government and the isolated Indian tribes of the Amazon. Possuelo has come to regret the unintentional destruction inflicted on the natives’ traditional ways via the introduction of trade and modern conveniences — even by the well-meaning contact his own agency has initiated. Now, Possuelo’s new mission is to create a government-enforced protected area, the size of Maine, where the last remaining Amazon tribes can live safely, undisturbed by the drug lords, fish and bird poachers, gold miners, loggers, and others who would exploit the jungle’s natural resources for financial gain. (The tribes would be free to come out and engage in contact with civilization, of course, but their retreat into the heart of the jungle seems to indicate a lack of enthusiasm for that option.) One such tribe is the flecheiros, or “Arrow People,” which is what outsiders call the tribe; no one has had a long enough encounter with these reclusive yet warlike people to know what they call themselves. Paradoxically, in order to know where to mark the boundaries of the protected area, Possuelo has to get as close as possible to the Arrow People without actually making contact, and thus begins a game of hunter and hunted through the wildest, most dangerous Amazonian jungle, as Possuelo and his 34-man team — with Wallace embedded — struggle to stay alive and complete their journey.

Unconquered gets off to a slow start, as Wallace recounts the circumstances that bring him to Brazil, agonizes over whether to leave behind his two sons and his girlfriend for an undetermined amount of time, and toots around town with his photographer buying assorted nifty expedition gear. But hang in there! Once they actually climb in the boats and shove off, it’s non-stop, nail-biting DEADLY PERIL for the rest of the way. Between the treacherous mudslides, steep riverbanks, swarms of insects, venomous snakes, piranha-filled water, and larger predators, it seems miraculous that no one died; many of the men suffer from malaria or dysentery, and all endure dramatic weight loss from the grueling physical exertion combined with starvation rations (supplemented by the bland monkeys, rodents, and fish the natives hunted). Possuelo, initially so charismatic and enthusiastic, retreats into hostile seclusion alternated with violent outbursts and lectures, stockpiling provisions and making wild accusations of theft while the men starve. The team’s eventual encounter with the Arrow People — it had to happen, right? — is a disastrous mix of incompetence, miscommunication, and bad judgment, remarkable only in that it could have been so much worse. Let’s just say things get pretty dark.

Wallace has some pretty fantastic material to work with, given that he’s seeing sights of astonishing natural beauty whenever he’s not actively defying death: pink dolphins! Flocks of parrots! “Jaguar People” tribes who tattoo their faces and perforate their noses with bamboo-shoot “whiskers” to look like big cats! But even during the lulls, he writes in an engaging, vivid style that’s full of sensory detail, whether he’s watching the tribesmen carve log canoes or chatting with the cook who’s grilling monkey meat. A generous photo section is welcome in that it gives faces to the characters we come to know, but Wallace’s clear, page-turning prose is truly what paints such memorable pictures of the trip.

Despite the severe hardships of the three-month-long journey and the frequent (mutual) incomprehension, it’s clear that Wallace has respect and affection for the hard-working men of Possuelo’s team, even while he remains skeptical that the various tribes will give up short-term financial gratification in the interest of environmental preservation and cultural tradition. It’s a fascinating and dramatic portrait of a world so far removed, and so different from our own, that it’s hard to even conceive of — although I can see quite clearly that I wouldn’t last 24 hours in the Amazon. Pass the DEET and an ice-cold Coke, please!