My Age of Anxiety: Fear, Hope, Dread, and the Search for Peace of Mind 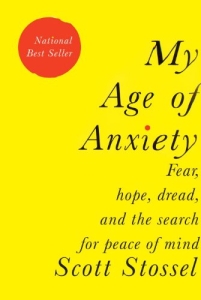 An Intimate Look at One Man’s Anxiety Disorder

As someone who was diagnosed with OCD (Obsessive Compulsive Disorder – a subset of anxiety disorders) shortly before college, I was impressed with Stossel’s bravery when I read a teaser article in the Atlantic describing an embarrassing visit to the White House caused by the breadth of his near crippling anxiety. The candor with which he depicted his misery, and the very illogicality of his fears, was inspiring for other, closeted  phobic people, such as yours truly. I picked up a Kindle edition of his story and began reading it.

My Age of Anxiety: Fear, Hope, Dread, and the Search for Peace of Mind is largely a scholarly probe into what causes anxiety. Thirty-five years ago that classification of mental disorder didn’t even exist. Now it is prevalent and most people in society are familiar with the terms panic attack and even OCD for that matter. The evolution of cultural understanding and the attempt to de-stigmatize mental issues comprise Stossel’s main focus and prove a launching point for his own liminal status. Beginning with the early Greek philosophers and moving forward in time, with noticeable pauses at Freud, Charles Darwin, and the entire Milltown mass-market introduction of psychiatric drugs and the tranquilizer fad, Stossel talks about what causes anxiety and circular mental thinking that becomes phobic in nature only to return to the main premise: we don’t know. Thoughts over just the last 100 years have changed so dramatically that science provides proofs only in that we are wrong, but it doesn’t give us any answers, comforting or otherwise.  The author, who in an openly honest attempt to cope with his anxiety and make it all right seems to devolve as he writes about how there are no answers, no comforting net below that mental precipice. Indeed, many philosophers have theorized that anxiety is part of an evolutionary response that is hard wired into us genetically and, as a fight-or-flight motif, is good for us. This seems to have disastrous effects, and as readers feel for this honest, fighting man, we also fear for him. The ending of the book isn’t the panacea that we fellow anxious people wast to find. There is no rescue story. No happily ever after. No answers, but only more questions.

The evident research which reveals how little the community actually knows, plus the concentration on the failure of medicine and psychiatrists to help leaves readers with similar disorders upset and bitter. We, like the author, begin to think “why bother. I am what I am and cannot be saved.” Not a good recipe for readers struggling with their own mental problems. This prospective does, however, introduce readers outside of this dismal world into an intimate portrait of a mind actively captured, however unbeknownst, in an active episode, showcasing the illogical thinking coupled with the exacerbated fear and a highly clever mind turning on itself with unsolvable quandaries.

The focus on Charles Darwin and the entire evolutionary angle, one which is often repeated, is a central focus of the unfolding essay which is half narrative, half academic treaties. For readers who are creationists or otherwise do not ascribe to the theory of evolution, it can be quite a bit frustrating since Stossel focuses most of his evidence within these theories. (especially that which disturbs him most – an idea that we are meant to be this way and therefore somehow survive better – terrible thought that). I was quite surprised to see just how much of a role evolution played in a book about, seemingly, one man’s personal mental experience.

The title, the anecdotes around the book’s creation, and the end chapter all promise a personal experience. The author puts a lot on the line and tells readers a lot; it’s an intimate experience and something that admittedly few of us would ever have the bravery to do. Yet with all the academics of anxiety’s history plus the fluctuation between hope that pills and doctors might hold the answer and a belief that anxiety is genetically coded and perhaps a good thing, (horror, horror, horror!) the author feels distant and readers want to move closer to this man, because ultimately, it’s him and his struggle, not the medical and biochemical history that we have been promised and that draws us in. Anxiety isn’t a generic problem just out there for unnamed people. It’s his problem and he tells readers enough, shares painful moments such as his wedding and effectively losing his first psychiatrist to his father, that our hearts are moved for the individual struggle. The difficulty of writing such a thing, of divulging it let alone giving strangers a front row seat is herculean, and the author does ultimately succeed, but readers still want a bit more. The academics are repetitive and, frankly, harmful in that they create vast generalizations and prompt people not to fight, but to wait for a cure.

My Age of Anxiety: Fear, Hope, Dread, and the Search for Peace of Mind is a good introductory look into anxiety both historically and from the prospective of someone actively in an episode. I would advocate people with similar problems, however, to look for another book. This could be a good volume to hand to friends and family, but the darkness of the author’s fear, in that it seems to increase as the book progresses, and the general nay-saying espoused by showing the developing and fragile field of psychiatrist has the effect of taking depressed individual and depriving them of hope, especially since it doesn’t end with an overcoming vibe. I applaud the author for being willing to publicly divulge something so painful, and I hope that future books from him may reveal decreasing anxiety and hopelessness.