Bubbles All the Way 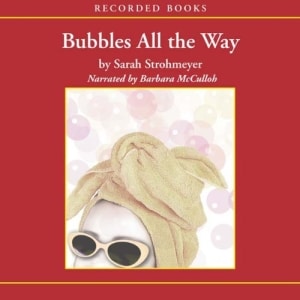 In the sixth, and currently last of Sarah Strohmeyer’s screwball comedy cozy mystery series, Bubbles Yablonsky, part time hairdresser and part time reporter, is getting ready for her impending re-marriage to her blackmailing ex-husband. Meanwhile, the damped yuletide festivities are marred by the sudden murder of Debbie, the small steel town’s debutant, which leaves Bubbles’ best friend on the lam. Bubbles’ young daughter Jane is still suffering from the turmoil of her kidnapping and is changing personalities, while the psychiatrist Dan hired is pointing to Bubbles’ bad mothering as the reason. Bubbles’ friend Sandy is skulking around on the loose, and when Bubbles attempts to find the real killer and rescue her friend, some trigger happy Santas and some threats related to her off-the-record investigation lead to a Christmas Bubbles and company won’t soon forget. Oh yeah, and there’s a gun-toting octogenarian with the irritating habit of just so happening to blow her husbands away. A charming combination between insane comedy, family drama, and a lovable cast of quirky characters, Bubbles All the Way was my introduction to Strohmeyer’s series, and all I can say is that I will most certainly be coming back.

I ran into this novel while searching through the library’s audiobook section for the next in the Agatha Raisin mystery series, another library find, when I discovered this quirky story. With the library closing down and time running out, I just made a grab for one and hoped that, despite it probably being mid-series, I’d be able to catch up in no time. Happily, this series is just as friendly to random readers as to true fans, and left enough mystery to make me want to (scratch that – need to) go back to the very beginning.

An 11 disc extravaganza, the first disc played off the tackiness of Bubbles with her zebra skirt and leopard jeans, not to mention her mid-drift baring shirts in winter with earrings that match her naval ring and her nonplussed reaction to Debbie’s death by poisoned hair extensions. It’s a slow start, and the first disc is a little too ludicrous, especially when her ex-lover Stiletto comes in for a random mad make out scene in her newsroom. By the time the second disc came around, however, I was hooked into this charmingly seasonal tale (yeah, it’s not even Halloween yet but I’m in the Christmas mood – just deal) and the lovably trashy characters. Bubbles is fun, good natured, smart, and a rather good sleuth. Her comedic observations (and the observations about her) keep readers laughing aloud (and wishing for traffic jams so we could keep in the vibrant spirit longer) while also make her seem distinctly human and just one of us – a regular person who is simply real with all the fears and worries of everyday life while also embroiled in an investigation.

Strohmeyer does an exceptionally good job keeping the investigation constantly moving and foremost in the narrative – a of failing many cozy mysteries series. Bubbles constantly investigates, is put in frequent danger, and dredges up enough dirt to keep readers guessing and attempting to resolve a mystery that ultimately proves beyond our wildest guess, yet satisfyingly inevitable. Certainly one of the best, and most intricate, mystery books I’ve read in a while without – and it never lost that cozy feel.

The secondary stories in the tale – namely Bubbles’ romance with Stiletto and her marriage to Dan keep readers engaged and emotionally invested in Bubbles. However, as many before me have already said, the resolution of this secondary mystery is simply unbelievable and the last few tracks on the disc (what I am told are the last seven pages in the book format), are unrealistic and ludicrous not to mention full of enough plot holes to make a Swiss cheese seriously jealous. Bubbles’ relationship to Stiletto is not resolved and questions that reflect on previously understood information leave readers (especially those who have followed the series from the beginning, no doubt) feeling like the rug has been whisked away beneath their feet to reveal a gaping hole.

Nevertheless, despite those last seven pages, Bubbles All the Way is one of my favorite cozy mysteries, and I am heading back to the library to read (ok, listen) to this series from the very beginning. Barbara McCulloh’s narration gives Bubbles a believable and relatable voice, full of sarcasm, emotion, and wit. So, cuddle down for a little snowy yuletide killing and get ready to dig into this hilarious and marvelous series!