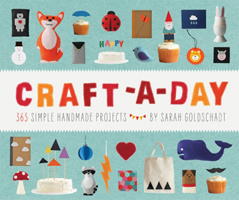 At first glance, a craft-a-day book sounded awfully ambitious. Sometimes one craft per year is all that I manage to accomplish (unless two half-finished crafts count as one complete one, in which case I have dozens). But this how-to guide offers 365 quick, easy projects that use items you already own and don’t require buying lots of new supplies and tools — which, as any crafter knows, can get expensive fast. Does Craft-a-Day deliver on its promise? Yes… and no.

The good: True to its word, many of the crafts in this book use only paper, cardstock, glue, felt, and needle and thread (plus true household staples, like Scotch tape). So it’s pretty low-risk and low-cost to try any of them. While no time estimates are given, most projects look like they’d take an hour or less; the author’s intention is that you really could find the time to make these crafts in a typical day. I also liked the endearingly imperfect photos of the finished products. With slightly jagged cutting lines, messy handwriting, and asymmetrical shapes, it looks like a real human actually made these items, not some professional lifestyle-magazine stylist.

The bad: The book’s biggest problem is the repetition of project ideas. If one day’s craft is, say, “Cut out cardstock diamond shapes and tape them to your wall in decorative patterns,” it doesn’t count as ten separate crafts to repeat those instructions with circles, hexagons, stars, etc. How many times can you cut out shapes and stick them on your wall? Nor do these projects seem all that kid-friendly. Most of the projects seem to be intended for impoverished early-twenties hipster crafters, who might be the only people on earth who have the free time and inclination to glue two dozen paper mustaches onto toothpicks (cupcake toppers). But for every idea that sounded genuinely clever and cute — like the personalized garland greeting card that calls for stringing small felt squares on thread and sewing it to a card — there were many more that felt ridiculously basic. (Because each craft gets just one page, including photo, they have to be so simple as to hardly require instructions in the first place.) Plus, the book is organized into themed weeks, which unfortunately makes the repeats feel even more… repetitive. (Ironically, I find myself typing “repetitive” over and over, but there just aren’t that many ways to say it!)

So yes, Craft-a-day technically achieves its objective by offering 365 days’ worth of simple, inexpensive craft ideas. But it does so only by reusing the same bland set of projects again and again. I would rather have had 100 solid, unique projects that I actually wanted to make — and couldn’t have thought of by myself. As it was, I found maybe 3 or 4 crafts out of 365 that I might actually use. Cramming a big, heavy book full of uninteresting filler just for the sake of getting to a gimmicky total is one way to make your how-to craft guide stand out in a sea of guides… but probably not in the way the author was hoping.