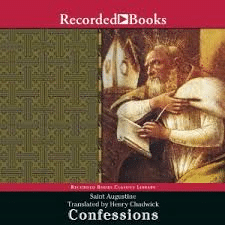 “For Thou hast made us for Thyself and our hearts are restless till they rest in Thee.”

The Confessions of St. Augustine (Latin: Confessiones) is the first autobiographic book known in the western world and follows. St. Augustine of Hippo as he enumerates on his sinful youth and gradual, painful search for the truth among various different religions, philosophies, and practices. Written in Latin between 397 and 400 AD, Augustine comes just two centuries after Christian persecution, yet his voice and the issues of his day resound with a modern quality; in the days where watching bloody gladiator fights was a true temptation, Augustine found himself enslaved both by unquenchable lust and a desire for knowledge – a longing that made him resist the seeming simplicity of Christianity. Between hubris of the mind and desires of the body, Augustine walks in a world strangely reminiscent of our own, breaking down his confessions of wrong doing in the form of a prayer to God and a wake-up call to the reader. A cohesive combination of 13 books intended to stand as separate units, Confessions highlights not only Augustine’s personal journey to Christ, but also some heady ruminations regarding the nature of time and the creation as depicted in the book of Genius.

An influential philosopher and teacher of his time, shortly after his conversion to Christianity he was ordained a priest in 391 AD and then almost immediately appointed as a bishop in 395 AD. Such a meteoric rise led to criticism; Confessions, therefore, is written both to God and to man; it is a defensive work in some ways, laying out Augustine’s path to righteousness but never missing any of his weaknesses. Indeed, many of Augustine’s “sins” are minor foibles, and he is far harder on himself than will be even comfortable for most readers (for instance, his belief that even in marriage sex is not to be enjoyed but used solely as an act of procreation and that enjoying food is gluttony.) His trials and tribulations, even his harsh judgments against self, show the human man painting not a Saint but someone relatable, someone we want to listen to, and someone with whom we are invested. This was surely intentional on the author’s part and a reaction to the criticism: a revealing of weakness that conversely strengthens his position as a spiritual leader.

The first several books within Confessions concentrate on the autobiography of Augustine. It isn’t a complete story of his life, since Confessions was written in his 40s and Augustine lived well past that. It is, however, a complete view of his formative years not so much chronologically as emotionally, taking us through his major temptations, his desire to steer away from God, his mother’s worry, and his eventual reluctant yet joyful conversion. The rest of Confessions dives straight into complex theology, specifically the nature of time and matter and how God exists outside of time; he looks at various different possibilities for the earth’s creation, specifically the seeming mention of pre-existing matter.

The Confessions of Saint Augustine is not an easy work to read, mostly because of its conceptual complexity. The language itself, although circuitous and somewhat repetitive, is easy enough for modern audiences, but the concepts that Augustine explores, particularly in the concluding books, are difficult theologically. Augustine starts from a very high level and his theology goes quite in-depth. It’s certainly not a beginner’s introduction to Christianity, despite its intent to convert readers. I’ve been a Christian my entire life, regularly read the Bible and attend church, and regularly read other theological works (namely C.S. Lewis) yet I found the last few books concentrating on time and matter to be somewhat elusive. I listened to the audio book edition of this narrative on my two hour daily work commute (welcome to DC folks) and feel that really, this book should be read, not listened to, and read in small chunks to fully digest the concepts Augustine presents. For readers who prefer a more accessible conversion narrative, I highly recommend C.S. Lewis’ Surprised by Joy.

The audio book edition I heard was translated by Henry Chadwick and narrated by Richard Ferrone. Ferrone is an award winning narrator with a deep, melodious voice. His reading is well done, meaningful, and emphatic. If you chose the audio book edition, however, listen to it slowly to fully absorb the contents. Highly recommended.