Girl Next Door, The 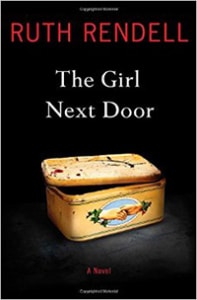 Ruth Rendell (who, I just learned, is a baroness!) is an incredibly prolific mystery/thriller author who’s written dozens of award-winning books both as herself and her pen name Barbara Vine. As you may know if you’re already a fan, the Rendell books tend to be more like crime procedurals (many starring Chief Inspector Wexford), while the Vine books tend to be more psychological suspense. Rendell’s newest book, The Girl Next Door, is something quite different — a slow, detailed portrait of the effects of a violent crime on its victims (direct and indirect) decades after the fact. It’s an interesting approach, but does it make for page-turning reading?

At the end of WWII, a group of children find a “tunnel” (actually an abandoned house foundation) in their suburban London neighborhood. For one summer, the kids make it their secret hideaway, meeting up daily for games and picnics, until one of the fathers discovers them and kicks them all out. 60 years later, in the same spot, construction workers discover a cookie tin containing two skeletal hands — one male and one female. The ghastly find makes the news, and those childhood friends reunite to try to help the detective who’s reluctantly investigating the extremely cold case. And, let’s be honest, to gossip about old times and speculate about the hands’ owners.

While the Case of the Hands in the Cookie Jar does gradually unfold in flashbacks over the course of the book, the focus is much more on the relationships between the childhood playmates who are suddenly thrust back together. Alan is trapped in a tediously dull marriage with Rosemary, a codependent and conventional housewife whom he settled for after a passionate, but failed, teenage affair with sex-bomb Daphne… who’s now back in the neighborhood and as alluring as ever. Michael gets back in touch with his sadistic and abusive estranged father, hoping to unravel the mystery of his mother’s disappearance. Reuniting with faces from the past forces the now-elderly children to look back on their life choices, ponder the roads not taken, and confront their physical decrepitude and the inevitability of death.

All of which is to say it’s a pretty slow-moving story, in every sense. None of the characters were particularly interesting, and the Alan/Rosemary/Daphne love triangle (which I assume is meant to be the emotional heart of the story) isn’t compelling. The constant onslaught of boring details about who ate what for lunch, what kind of wine they drank, and what color of sweater they wore may be an accurate depiction of the tiny, claustrophobic world of retirees, but it completely overshadows whatever suspense there is about a 60-year-old murder. After the third or so conversation about which kind of sherry was best to drink for the time of day, I just had to grit my teeth and slog through to the end.

Overall, The Girl Next Door is hardly one of Rendell’s best, and definitely not for her fans who are looking for edge-of-your-seat crime-thriller chills. Older readers may enjoy a novel that portrays senior citizens as autonomous adults who are still capable of sexual passion, violent cruelty, and romantic folly (vs. stereotypical twinkly-eyed cookie-baking grandparents), but if I never read another brain-melting internal monologue about which bus line to take and which stop to get off at, it’ll still be too soon.