Demi-Monde, The: Winter (The Demi-Monde Saga) 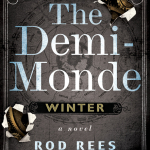 I’ve been reading a lot of book-1-in-a-forthcoming-series titles lately, and I have to tell you, it’s really wearing me down! It’s a big time investment figuring out the geography and rules of any made-up universe, not to mention the particular political and/or magical machinations that are driving the plot (especially if, after all that work, you cut bait and decide not to continue the series). The worst part, though, is always the ridiculous and self-indulgent fantasy lingo that authors love to throw around by the shovelful. And the most egregious offender I’ve ever seen in my life, hands down, is The Demi-Monde: Winter. (Book 1 of the Demi-Monde Saga, naturally.) It might as well be titled “A Fantasy Epic Written by Your Cool Steampunk Dad.”

Struggling college student and jazz singer Ella Thomas gets called in for a top-secret and bizarre audition by the government. After a week of non-answers and extensive testing, they tell her the deal: the U.S. military, finally realizing that their outmoded fighting style doesn’t work in places like Iraq or Afghanistan, has created a super-elaborate virtual reality world to train soldiers in extreme warfare. This world, called the Demi-Monde, is populated by about three million “people,” crowded into replicas of history’s most oppressive and dictatorial regimes (e.g., Soviet Russia, Nazi Germany), and systematically deprived of resources in order to keep everyone permanently surly and combative. Most are physical copies of real-life humans via some technical mumbo-jumbo, and a handful are programmed to be virtual doppelgangers of famously sociopathic dictators and oppressors throughout history — again, to assure a permanent state of unrest. The intensely sophisticated software makes the Demi-Monde feel utterly real, but in order to fully immerse yourself in its world, your consciousness is detached from your physical body (I know), leaving the body in a vegetative state out in the real world until your consciousness returns. If you die in the Demi-Monde, you die in the real world, because your consciousness is lost.

Unfortunately, the Demi-Monde software, which was designed to be autonomous A.I., has gotten a little overzealous, and some of its more power-hungry inhabitants have discovered the “daemons” (humans) and are keeping them hostage to milk their blood supply — did I mention that Demi-Mondians drink blood to survive? Worse yet, the Demi-Monde’s Nazi leadership have figured out that many Demi-Mondians have real-life doppelgangers in the “Great Beyond” (the spiritual otherworld where daemons come from), and have magically summoned a daemon — no less than the U.S. president’s goth daughter, Norma — to initiate a grand world-crossing scheme. Ella’s mission is to infiltrate the Demi-Monde, posing as a jazz singer on the nightclub circuit (she’s black), rescue Norma from her captors, and get her to a portal back to the real world. Much to Ella’s surprise, she begins to know and care about the Demi-Mondians and their virtual struggles, and before she knows it, her rescue mission is entangled with a worldwide revolution — and a star-crossed romance.

Doesn’t sound that bad, does it? Which is how I got sucked into reading it in the first place. The problem is, while the setting and story are intriguing enough, the prose itself is painful. Everything has to have circa-1990s mid-word caps, like UnFunDaMentalism (a religion based on asceticism = “un-fun” = get it?), HimPerialism and HerEticism, PsyChicks (a psychic’s attractive female assistant), RaTionalism, woeMen, Suffer-o-Gettism (a contraction of Make-Men-Suffer-o-Gettism)… ugh, the list goes on and on. Each chapter is introduced with a risibly fake-academic quote that supposedly explains some facet of Demi-Mondian society, but which are all unbearable to read. Rees misses no opportunity to shoehorn an inane pun in, even when it makes no sense in the context of the world (one quote mentions the militant feminist concept of an all-woman paradise called “MostBien,” just to have an excuse to derogatorily call those women “LessBiens,” EVEN THOUGH NEITHER SPAIN NOR GREECE EXIST IN THE DEMI-MONDE, SO NOBODY THERE WOULD GET THE JOKE OR HAVE INVENTED THOSE TERMS). And he never writes a simple sentence when he can make it three times as long and swollen with clumsy, verbose attempts at wordplay. But in so doing, Rees makes his entire setting a cheap, lame joke and undermines his own efforts to create a robust and believable world. It’s hard to care much about a story when the author is so obviously using it as a platform to make embarrassingly weak puns and showcase his efforts at wit; you can just hear him guffawing helplessly at his own turns of phrase. Nobody else will be, though.

In spite of the writing, I managed to get through to the end because I wanted to see where it was going… only to belatedly remember that, of course, this is the first in a “saga” — presumably, at least four, one for each season — and we were nowhere near any sort of resolution. Unfortunately, I just don’t have the time to slog through what will turn out to be a multi-thousand-page epic for such minimal returns. If you think you do, I suggest you try the Song of Ice and Fire (aka Game of Thrones) series first, which has just as much blood and violence and is already five door-stopping volumes long.