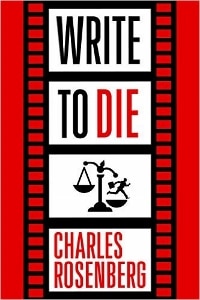 Ah, Hollywood.  We do love to hate you, with your lavish lifestyles, petty bickering, and high priced attorneys.  We hate them, too, of course, but without the love part.  So why would anyone choose to write a mystery about a high priced Hollywood attorney defending a studio in a petty bickering session and his ethically challenged new associate?  You got me, but author Charles Rosenberg does just that in Write to Die.

His main protagonist is attorney Rory Calburton.  Rory is a new partner in his entertainment firm and is in charge of a plagiarism suit filed against the writer of the studio’s upcoming blockbuster.  He’s a big deal, that Rory.  He’s generally a pretty stand-up, mostly boring guy, trying a complicated but generally boring case.  But suddenly someone gets murdered, and his newly appointed associate turns out to be stunningly beautiful and not as stand-up as he is, and things go all sorts of sideways.  For 465 pages.

So here’s the thing.  The storylines here are not bad at all.  The plagiarism case is pretty interesting, and so is the murder case.  We spend a lot of time in court with Rory and/or Sarah (the aforementioned associate) and that time is pretty engaging, in a dry, legal sort of way.  But lots of people love digging into a complicated legal case, so it’s all good, right?

Not so much.  As good as the courtroom scenes are, the characters are weak, annoying, and sometimes downright unpleasant.  Rory has a bit of a pedantic streak, and a bit of a misogynistic streak, and a bit of a pompous streak, and a bit of a judgmental streak.  Yeah, that’s a lot of streaks.  Sarah uses her sexuality to get what she wants, plays mind games, breaks rules when she doesn’t have to, has no respect for her job or her boss, and gets off on the rush of doing illegal things.  Can you see where these two aren’t particularly charming as protagonists?  Their considerable flaws might be lovable if they had redeeming qualities to offset them, but they really don’t.  Just not being a total asshole, all the time doesn’t quite cut it.

Overall, Write to Die is not a bad book.  It’s a fairly interesting legal thriller, but without adequately engaging main characters to support the plot lines.  It’s also quite a bit too long for the quality of the content, which makes it tough to get through.  2 stars out of 5 for Write to Die, and a recommendation for only the most devout fans of courtroom drama/mystery.

My thanks to MaryGlenn McCombs for sending me a review copy of Write to Die.