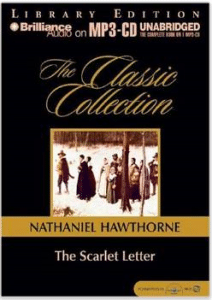 Hester Prynn, young married woman with an absentee husband who probably long ago drowned at sea, is standing on the town scaffold, holding her burden of sin for the world to see. Proud, even arrogant, Hester fights against the conformities of Puritan society while yet being a part of it, the scarlet A (adulteress) embroidered on her chest and her new infant cradled in her arms a testament to the calamity of passion. Goaded to name the father, yet resilient in her defiance, Hester is stunned when a familiar misshapen figure hovers in the crowd – her husband. Torn between the quest for redemption and freedom, Hester, her vengeful husband, and her doomed lover represent a triangle of human emotion attempting to define a foothold in the nebulous world of sin and purity.

Once again on my classics kick, I randomly Googled a list of the greatest 100 books and started requesting titles as I came to them. The first on the list was Nathanial Hawthorne’s Scarlet Letter, a classic depicting the fate of an adulterous woman who is forced to bear the testimony of her mistake on her person for all to see. Other than that, I really knew nothing of the story or really what to expect. I  was both shocked and entranced by the almost modern feel of the story combined with the elegance of antique language and the austerity, the haunting starkness, of the Puritan times. Sobering and yet oddly uplifting, turbulent, emotional, and I’ll admit it, quite the tear-jerker, my disinterested attempt to read all 100 of those classic books, just to say I had, morphed into something tumultuous and passionate.

Pretty much everyone has heard of The Scarlet Letter or at least seen an adaptation, either film or book. Much of the focus around the novel, at least from the student cheat sheet type books, declares the novel to be thwarting Puritanism, (somewhat) religion in general, and advocating feminism, making Hester the hero and the town the villain. Yet, it’s far more complex and layered than that. Religion isn’t the enemy, although hypocrisy to some extent is, yet the true focus is on the heart and the intent. The characters capitulate to society in the end, not in defeat, but more in refreshing honesty. Sin is acknowledged, yet forgiveness is implicit as are the dictates of circumstance – an unequal marriage between an older, absent man and a young woman. A marriage made without love. Circumstance, emotion, regret – it all pools into one and there is no easy answer, merely dignity in the way that Hester both accepts her penance and yet continues to think for herself. Is she a feminist? Not really. A Puritan? Not really. Something in between, someone seeking, someone who is both a product of society, religious interpretation, and life experiences. Yes. It’s this complexity that is so amazing, so true to life. This is the complexity that creates rounded characters, relatable in joy and misery and all the dark shades in between.

Hester’s public stance of guilt and acknowledgement of her error are contrasted with the illness of silent guilt which eats away at her lover – a prominent, revered figure in the town. Both are sympathetic, yet only Hester remains strong. Chillingworth, Hester’s husband, is a wronged party turned evil from pain and the sympathy that might have been granted him is destroyed by his own savage desire for revenge, showing that people are ultimately defined by how they choose to react than by actual moments of sin or error.

One small quibble of warning. The first chapter of this novel details a certain custom’s house, evidently mocking political parties and figures of Hawthorne’s time, and describing how this story was unearthed. Despite the excellence of the rest of the narrative, this unrelated political tirade is infinitely boring and, naturally, quite long. I was tempted to give up at first, my understanding of the story being that it wasn’t political but personal. Once past the first chapter and greeted with the proud face of Hester and her highly decorated scarlet letter, I was delighted that I had continued on.

While there are, in nature of this novel’s age, plenty of “thees” and “thous,” the language yet remains clear, energetically descriptive, and easy to follow. The mimicry of nature is breathtaking and evocative of the characters’ interior worlds. There is much description, yet the novel remains concise, focused, and maintains that oddly modern feel with its open frankness and faint criticism of both society and the individual. More importantly, it’s simply gripping and, while devastating in many ways, a fast paced, breathless story that will linger in the mind and the heart. Highly recommended.

A Note on Edition: I listened to the version read by Dick Hill. I greatly enjoyed the audio book, especially the inclusion of piano music as scenes transitioned. Having this tale read, specifically the dialogue, evokes the inner turmoil and the out pretended peace of our characters in such a way that we feel truly a part of this world. I highly recommend the audio edition.