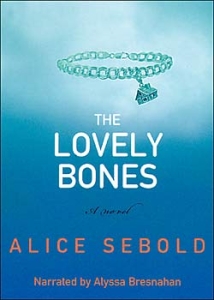 A Classic Inspection of Grief

“My name was Salmon, like the fish; first name, Susie. I was fourteen when I was murdered on December 6, 1973.”

Susie Salmon, murdered and raped at fourteen by a brutal man, cannot let go of her earth bound existence and all that might have been. Imprisoned in her own heaven, a place which does not solve all calamities (and does not remove loneliness), Susie watches her fractured family and her killer as the years progress. Death does not end the sense of seeking for explanations in brutal places, and while Susie’s heaven may be beautiful, she cannot let go of the temporal existence she was only briefly allowed to live.

Below, Susie’s parents undergo different forms of grief; Susie’s father immortalizes her while her mother tries to escape the agony by forgetting. Susie’s siblings Lindsey and Buckley, encounter the pity and the infamy of a school world unbalanced by murder and morbid curiosity. And Susie’s killer – how is he marked by his repeated dismemberments and violations of young children?

Embroiled in a long lasting police investigation, detective Len Fennerman is overcome by a family in grief and the continual evidence that sometimes there are no answers and there is no closure. Above it all, Susie watches and waits, trying to live through memories of her that are growing dim.

Only Ruth, a young woman touched by Susie’s shrieking spirit leaving earth, is able to plumb the depths of the unseen and through her, Susie holds out a strange kind of hope, a feeling of connection to a world that is going on without her. And so a ghost is haunted by her own life and the living plagued by a desire for closure and the ramifications of grief.

Reading this book for the first time around seventeen, I was captivated by the imaginative nature of the work, the luxury of the flowing sentences, and the intense emotional paradoxes embodied by characters struggling not only with the death of a loved one, but the reality of senseless evil in the world. I read through the book in a few days, and while at that age I certainly didn’t understand some of the overlying themes (indeed, I may have luxuriated in the very morbidity of the tale), I appreciated the depth and scope. Seeing The Lovely Bones audiobook (excellently read by Alyssa Bresnahan) displayed at my library, I recalled the fond memories and was curious to see how, ten years later, I might respond to the novel.

Having now been through the stages of grief, The Lovely Bones takes on an odd comforting nature, a solidification of surviving souls; it’s not an easy read and while my teenage self plowed through pages unaffected, my adult self stands back while brushing tears away and remembers. The comfort and beauty of this novel is in its open armed acceptance of grief, in the way that it depicts different reactions through different characters, and in the complexity of being there for others or coming to others during such a hard time. The sadness is stifling at times, and while the novel is “enjoyable,” it’s not with that usual flair of pleasure that we greet it. Philosophical and raw, the Lovely Bones hurts. There are overarching threads of forgiveness, letting go love, and family strength, yet there are undercurrents as well which in their power almost dwarf Seabold’s ultimate message of strength.

The audio book edition provided an extra disc with an interview with the author. This interview, originally done at the height of the books popularity back in 2002 (oddly enough, and perhaps chilling, the year that I was fourteen) opens up new doorways in understanding. Seabold is charmingly honest referring to the inspiration for Susie’s character. Raped herself at the age of eighteen in a tunnel that she later learns was the location of a graphic murder, Seabold was forever changed. The Lovely Bones echoes her wisdom – catching the killer doesn’t solve everything and tie it with a nice bow. Specific questions, especially about the difficult (and I admit it, personally dislikable character of the mother) led Seabold to explore her thoughts on grief and her main focus of the novel: the movement forward is more important than some of the steps. In this manner there is compassion, forgiveness, and strength in the novel.

What captivated me at seventeen, and still does, was the beauty of the writing and the language. I am pleased finally to be in agreement with my cantankerous teenage self. The language was even more lush this time around, especially since I understood the depths it was plumbing in a more personal manner. The metaphors and imagery makes this experience both mental and visual in a manner that is unique to this particular work.

The characters are a mostly sympathetic portrait, all of them complete. Even the characters readers do not like (in my case the mother and Len) are living, breathing people in crises and while we may not agree or even sympathize, their very humanity demands a certain level of compassion. Other characters, such as Jack and Lindsey, through their actions and reactions, draw readers into their internal worlds to a level that is almost painful, the agony of their souls overflowing the pages.

The only segment of the novel which I found discordant with the greater themes was Susie’s brief interlude on earth when transferring bodies with another character. Susie’s decision to have sex with her high school sweetheart seems to cheapen, even demean the greater message. Meantime, Ruth’s celebrity appearance in heaven left me cringing and wishing that the days of white out were still around. Still, while certainly the weakest link in an otherwise iron chain, The Lovely Bones remains spectacular and moving throughout. A true modern classic. Highly recommended.