Island of Dr. Moreau, The 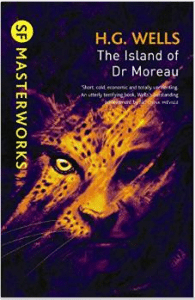 A Visceral Classic with a Bite

Back to my classics kick and inspired by a Why Did This Get Made podcast on the movie rendition of this novel (my boyfriend’s obsession with podcasts mirrors my own obsession with books), I went on the library’s annoyingly long waiting list for the audio version of this novel. The plot follows an amoral surgeon with a zest for vivisection, shunned by horrified society, on his secret island where he performs gruesome experiments to convert animals into a type of human being. Carving their malleable flesh while they scream in agony, Dr. Moreau is playing God, but perhaps his experiments, who show the power of talking and walking on two legs, aren’t quite as tamed as he would like to think.

Enter our narrator, a man shipwrecked and through a series of dire circumstances abandoned on Dr. Moreau’s island. Moving with the fierce swiftness of inevitable disaster, the beast people show signs of regression, especially those who were formerly carnivores. Taken into the confidence of drunkard Montgomery (Dr. Moreau’s helper), our narrator meets and interacts with this strange world, all the while seeing signs of madness, cruelty, and disintegration. As the beast people chant the law (not to walk on four legs, not to eat meat, etc.) their hearts and desires betray them.

A student of Darwinism, acclaimed science fiction author H.G. Wells wrote The Island of Dr. Moreau as a response to the misuse of scientific experimentation and the results of hubris. Similar to the theme of Jurassic Park (yay, for the new movie coming out tomorrow) the idea is that man should never seek to control nature or see himself in a deified sense. Naturally, if man does, all hell breaks loose.

A fast read, the devolution of the beast people captures Well’s overarching theme while also promising something deeper in the tragedy of these tormented and vivisected animals. Readers crave more (well, I did anyway), and while the story concentrates on the outward actions and destruction of Moreau’s island, the inward emotions of the beast people remain aloof, yet eloquently hinted at. I could easily see this novella stretching into a series, providing an intimate knowledge of the beast people and their fear of “the house of pain.” There is much here to captivate the imagination, tug at the heart strings, and most importantly, deliver a warning.

Dialogue heavy, the writing has a distinctly contemporary feel. In the edition I listened to, read by Jonathan Kent, the gruff voices of the beast people and the commanding tones of Dr. Moreau are stunningly evoked. Distinctive voices done by Kent enhance the atmosphere and immerse readers in the world. The audio book edition is certainly the best way to encounter Dr. Moreau and his island for the first time.

A classic tale, The Island of Dr. Moreau is literature with a bite. Brutal, swift, and unforgettable, the tale retains a sense of lingering corruption and horror. Highly recommended.