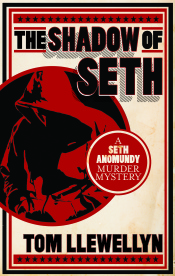 What do you think of when someone says “teen sleuth”?  Nancy Drew?  A Hardy Boy, maybe?  Perhaps even a touch of Harry Potter (which is obviously so much cooler)?  Not this time.  This time we get gritty – something teen sleuths are not so well known for.  But Seth Anomundy is so gritty that Nancy Drew’s dad would never have let him take her to the drive-in.

Seth makes his debut in author Tom Llewellyn’s The Shadow of Seth.  He isn’t a bad kid, but he has definitely been dealt a difficult hand.  Set in a tough neighborhood in Tacoma, the story starts by giving us a snapshot of Seth’s life.  He lives with his mom, who isn’t the worst, but she’s far from the best.  She works nights as a cleaning woman and has a wild side that keeps them living on the edge of insolvency.  Seth works various odd jobs around the neighborhood to help make ends meet.

We also meet the people who help keep Seth’s world afloat.  Miss Irene, who runs the Shotgun Shack restaurant; ChooChoo, his mom’s boyfriend and owner of the local boxing gym; Nadel the clock repairman; and the foul King George, general teenage thug.  George doesn’t help Seth’s world as much as inhabit it without permission.

It’s a day like any other when Seth picks up a clock for Nadel in a rich neighborhood (though meeting the beautiful daughter of the owner is something new and different) that takes a turn for the much, much worse when Seth finds out that his mother has died.  It seems like just another junkie death – and the police as much as tell him they aren’t going to do much.  But Seth knows better and starts digging.  He also starts seeing that pretty rich girl.  The combination turns out to be, well, not so healthy for our gritty teen sleuth.

I liked The Shadow of Seth.  I didn’t expect to.  Gritty isn’t usually my thing, but it really works here.  Seth is tough without being age inappropriate.  He’s had a hard childhood that made him grow up fast in some ways, but mostly he’s a scared, sad, 16-year-old kid with a few extra street smarts in his mental toolkit.  His bonds with the people in his neighborhood feel real enough that I believe that these people are as much like family as if they were his own flesh and blood.  They aren’t exorbitantly generous with their time or resources, but they clearly have a soft spot for this kid they’ve watched grow up.

The mystery itself is good – fast paced, moderately complicated, and well plotted.  It’s a cozy type mystery with a hard, sharp edge.  The main character combined with the effective setting, decent mystery and general rough and tumble tone of the book make the whole thing come together into a pretty compelling whole.   I have to admit that I didn’t love the romance aspect of the story, but that’s probably because I’m a wizened old grump – and also it felt a little unnecessary and forced.

Overall, this is a really good first series book.  The Shadow of Seth is Llewellyn’s second book and I hope to see more of both him and Seth.  4 stars out of 5 and a solid recommendation for those who like a gritty mystery with a side of teen angst and soul food.