Run of His Life: The People v. O.J. Simpson 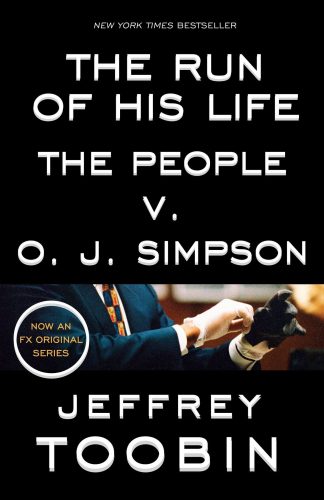 Behind the Scenes of the Sensational Trial

One of my earliest memories is of my parents watching the police chase O.J. Simpson in his white Bronco on TV and thinking, “what a weird chase, it’s so slow.” But that was pretty much it, until years later the case was brought up again with OJ’s proposition to publish his supposedly hypothetical confession in the form of a book named If I Did It. I was older by that time and more than a little shocked that a man nearly convicted of murder would return to the scene, as it were, and drag his name through the mud willingly. Recently, when If I Did It popped up as an Audible freebie, I had to see what the fuss was about. After reading O.J.’s selective memory of the events leading to his ex-wife’s murder (and the murder of Ron Goldberg), I wanted to see what was left out and what was deliberately obfuscated.

Enter author Jeffery Toobin’s The Run of His Life, a book touted as one of the most complete and accurate deep-dives into the trial. It begins in a room with the forming Dream Team who are talking about the obvious guilt of their newly acquired client, a man arrested before for wife beating who has now taken the next step. From there, the story follows the machinations of Simpson’s lawyers, including the strife between Shapiro and Cochran, the behind the scenes fighting for glory, and the evidence that the jurors examined. Toobin covers not only what happened but how it happened. How Simpson’s famous team came into being, how they used chance, perception, and facts to weave a compelling story that spoke to deeper issues, and how the prosecution, through hubris and mistakes, faltered during what should have been an open and shut case.

The Run of His Life is all very in-depth and, unlike Simpson’s very manufactured “tell all,” it is concerned not with the lead up to events, but with the aftermath and the manipulation of a trial. There is a large cast of people who move in and out of the trial, and it’s difficult to track, but the message soon becomes clear: the victories and screw-ups were based on lack of perception and a lot of prosecution mistakes. Toobin does, however, step out of his strict timeline once to give us an overview of the city of Los Angeles’ history with a brutal police force, using that to help readers see why Cochran’s direction worked and why jurors responded. It’s a fascinating look at how law does and does not work, at how mitigating factors not related to the crime but to emotion and oppression made OJ the figure head for something that he, in his own life, never seemed to care about: his heritage.

The Run of His Life is an intense book. A go to for those who want to deeply study OJ’s historic trial and how Cochran and Shapiro become household names. It’s a bit daunting for the casual true-crimer who wants a bit of background but not necessarily the entire legalese of what went down. But it is well told, if intense. At times I was keeping pace with the story, intrigued, at other times bored and overwhelmed by the constant amount of information, the names and places that flashed before me. Still, this is obviously the quintessential OJ trial book for a reason. It may not be the best place to start for a quick overview, a fact or two, or a general outline of what happened, but it is THE place to go to for the full scope of the trial, for what was done behind the scenes, what was said and failed to be said, and how those jurors came to their unanimous and still hotly debated verdict.