If I Did It 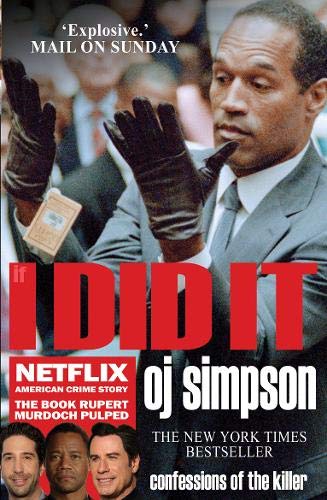 Time for some honesty. I think we have all kind of wanted to read If I Did It since the rumors circulated that the man who allegedly killed Nicole Simpson and got away with it was going to publish a book about his crime and to thumb his nose at the justice system that let him walk. I think most of us had the guttural reaction of repulsion and disgust, but that inner rubbernecker in us all wanted to know just what OJ was finally willing to say about the night two people were murdered horribly, a crime that led to an electric trial that cleared OJ legally, if not in the hearts and minds of the American people. A lot of us still think he did it. The publishing of this book just made us think it more.

As it turned out, the Goldman family got the rights to OJ’s book and later published it. Another move that left a sour taste in many people’s mouths. Here the victim’s family is supposedly profiting. And that’s where the book opens, with a lengthy prologue from the Goldman family talking about everything they have been through with OJ. There is surety that he killed Ron Goldman, their son, and got away with it. The endless legal battles. The civil case that was won and the payout that was never received. Their reasoning for going after the book rights and publishing this travesty. It’s a reasoning that resonates, which is not what I was expecting, and a central part of understanding how the book ended up on shelves and eventually in my Audible queue. And with that long story, we fall into another prologue, the ghost-writer who talks about his own surmises and experiences with Simpson. By the time we get to the text, we have formed an opinion about OJ, about what he did and why he later wrote this “hypothetical” treatise about killing his wife and the unfortunate man who was at the wrong place at the wrong time.

OJ’s story is well written in that it is casual, conversational, trying to create an intimacy with readers and forge a certain, “hey, I’m flawed,” but I’m telling you the God’s honest truth” vibe. It doesn’t work. My knowledge of the trial going into this was limited. I was a child when it happened, and I remembered none of the details. After reading If I Did It, I later got into more in-depth books that walked through the evidence and investigation. But here, functioning as the supposedly perfect audience who knew very little of the pertinent details, I still didn’t fall for Simpson’s overdone charm. It didn’t make sense.

In a nutshell, Nicole is quite the villain here, and OJ just loved and adored her anyway, even helping her and giving her dating advice after their divorce, because despite his unrequited love, he just wanted her to be happy, no matter how much it hurt. But his kids – that was his weak point, and Nicole was becoming a bad influence on them. The fights were misunderstood (Nicole was the aggressor), and OJ was too much of a nice guy to let her get a bad rap as a husband abuser. He took it on the chin and rolled with it.

Then comes the chapter we are all reading for, where OJ slides off into more obscurity, denying what he is about to tell us before he even begins. Noting that this is all theory and it totally, 100% did not and could not happen. He adds a mysterious friend, goes to Nicole’s, and blacks out, B-movie style, only to awaken with a weird knowledge that maybe something bad happened. That’s it. That’s the big reveal.

Then it’s all defensive. He had a small cut on his hand from throwing a glass upon hearing that the love of his life was found murdered. The gloves, the blood trail, all that evidence – never mentioned. The car chase – a simple misunderstanding. He was returning from viewing his wife’s grave, nothing more. And then the story simply ends.

I got it as a freebie, and honestly, as such it is worth listening to for those of us who grew up with the trial. I do vaguely remember playing in the den and seeing the weird low speed chase of OJ on TV and my parents shock at the verdict, after all. It’s also interesting to get a peek into the mind of someone so defensive who is obviously weaving a fairytale I-was-the-good-guy story while obfuscating the entire time. It’s interesting and quite readable. Believable, never. But if you’ve long been curious about If I Did It, then I recommend picking it up. It’s a quick read and thankfully none of the proceedings actually go to OJ.