Rabid: A Cultural History of the World’s Most Diabolical Virus 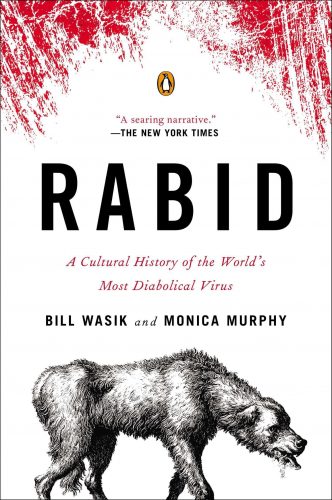 It goes without saying that humankind has always lived in the shadow of fear, and one of our greatest fears is the inexplicable and terrifying specter of disease. Even know, we don’t fully understand the viruses that surround us or the seemingly new ones that are constantly rearing their ugly heads. The past was no exception.

The term rabies and rabid has become part of our culture, both in obvious ways (have a little Stephen King and his good boy turned emissary of death, Cujo) and more subtle maneuvers such as our relationship with family pets and even our favorite spooky stories, from the suave vampire to the shambling zombie.

Rabid: A Cultural History of the World’s Most Diabolical Virus starts as it means to go on: gruesomely. We begin with the real story of a long-forgotten lord and his devoted hunting hound turned violent. The lord, of course, thinks nothing of the dog bite that will claim his life, and some of the earliest physicians’ scripts showcase the horror of rabies, from the madness to the hydrophobia. It’s not an easy death and once you have rabies, once it has coursed through the nervous system, nothing can save you. Time hasn’t changed everything, nor has our supposedly more enlightened medicine. That’s why the family pet has shots every year. That’s why those little tags they give you at the vet are so important. It’s also another reason that bats aren’t on anyone’s favorite list right now.

Twelve-thousand years ago, give or take, bats introduced rabies to dogs, man’s supposed best friend. This led to a dualistic love-hate relationship between the man and the dog who wants to be with the man. Dogs were not just pets, but necessities. However, any dog, even a good dog, was susceptible to the disease. Modern theories even suggest that ancient outbreaks of rabies and its bestialization of the victims (humans infected rarely bite though) are the catalyst for our modern-day monster stories especially the mythos of vampires, werewolves, and zombies).

Authors Bill Wasik and Monica Murphy cover the effects of rabies on the victim alongside the history of its spread and humankind’s growing understanding of a virus we still cannot control. Rabid then oscillates between the grimness of ancient Greek mythology inspired by rabies and the modern-day suppositions, all the way to the 2008 outbreak of rabies in Bali. Along the way, we learn the history of the vaccine championed by Louis Pasteur, tales of the few rabies survivors, and the ongoing debate about using medical comas to give the body time to fight the neurological invasion. At times the book is breathtakingly terrifying, at times scientific, at other times speculative, but always interesting. And I say this as a person who rarely trapezes into the non-fiction genre.

As someone who has had “after exposure” rabies treatment, I found Rabid exceptionally interesting and terrifying in equal parts. Thankfully for me, things have come a little further since 2008 and the writing of this book. It’s a misnomer that you always get the shot in the stomach. As a matter of fact, when I needed the treatment, I was given right a shot of immunoglobin, which must be given in a hospital and measured for your body weight, at the actual bite site (my hand). And then you have a long line of regular shots you take as a walk-in. So no, the treatment for post-exposure is not as gruesome as you expect, but this book certainly makes it obvious why it is vital and how far we had to come to get to this point.

Most fascinatingly, the structure of the rabies virus and its inherent mysteries does offer some hope. The last portion of the book looks at how we could turn around this ancient bugbear of humanity and use the virus medically in the potential future. In the end, I highly recommended Rabid for anyone who loves a good medical read dosed with history and culture and who isn’t squeamish.