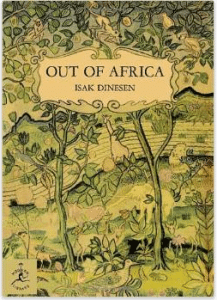 Out of Africa: A Memoir of Living in Kenya

A memoir style portrait of early colonial life in British East Africa (Kenya), Out of Africa is an account that fluctuates between elegy and euphoria. Written by Baroness Karen von Blixen-Finecke under the pen name Isak Dinesen, the long account gives no thought to chronological structure, but instead meanders with the moods of memory and the sways of emotion.  Depicting the Africa of her utopia days, there is something brilliantly beautiful resonating in the poetry of her delivery and the subtle beauty of her thoughts. Highlighting human relationship, dignity, and the vastness of unconquerable nature, Out of Africa is a portrait of a time and place with philosophy undergirding the interpretation of life, both colonial and native approaches to situations.

The Baroness married her second cousin and moved (from Denmark) with him to the farm in Kenya in 1913 where the enjoyable hunts with her new husband soon dissipated under the burden of his faithlessness. Contracting syphilis from him, she spent many years trying to recover from the disease. The couple was divorced years later, yet the Baroness’ love of Africa and the Ngong Hills inspired her to stay on and continue running the coffee plantation. The farm was mostly supported by local “squatters,” the Kikuyu and occasionally Somalis and Masai, and the Baroness comes to develop a unique relationship with the true owners of her land.

Despite all the turmoil our historical knowledge allows us to know regarding the Baroness’ ill-fated love life  (i.e.  her marriage was preceded by a failed love affair with her future husband’s brother)  and shaky health,  this major life details aren’t even background for the story, which never mentions husband, her long term lover, or disease.  Perhaps it was the delicacy of the times (this was published in 1937) or perhaps her own strong spirt and innate respect of privacy and quiet determinedness.  The Baroness remains a remote entity from us on many levels, and yet on others she reveals an entire interior world. Sharing her heart and soul with us, she remains aloof regarding the personal details of her life. This may be a disappointment to readers familiar with the 1985 film based on the story of the Baroness’ long term affair with Denys Finch Hatton. However, the result is a snapshot of a time and place, a historical image and a personal insight into the early days of colonialization.

Like many writings from this time period, especially those created by colonizers, the narrative has its rough edges. While mostly respectful, the Baroness does show a certain unavoidable amount of “white man’s” superiority. The referral to tribes already living on the land as squatters is annoying and darkly ironic. The occasional degeneration of natives and their predilections marks some of the Baroness’ ignorance and conditioning.  However, her attitude is mostly kind. There are degrees of wonder and interesting comparisons between the natives, whom she mostly respects, and the ludicrous nature of the government. The Baroness represents an indomitable power to the natives and shows deep insight into the inner workings of each tribe as they interact with each other. There are elements where the narrative is offensive, sometimes by statement and sometimes by general omission, yet it mostly remains a palatable historical documentation of early colonialization.

While history does indeed have its place and time, Out of Africa stood out to me more as a work of wonder and poetry. The lyrical nature of the Baroness descriptions and her manner of seeing nature and people in a universal light provokes deep thought. There is a deep sadness, as she is eventually forced to leave her home due to failing finances. Her partnership with the people, both the natives who work the land and various assorted friends with similar addictions to travel and a desire to shuck off the bounds of society, gives her a vibrant social aspect. Yet her very aloofness marks her as something separate, a person in the midst of the crowd who sees everything from the outside. It’s a unique perspective, this quiet of solitude in the midst of so much.

Yet, despite the beauty and the aliveness that it gives to history, the book feels like an account that glosses over too many items.The Baroness’s withholding of much of her own life leaves readers with vibrant impressions of places interspersed with chasms. Only in the concluding section of the narrative does chronology and personalization come into play. Otherwise, isolated incidents, some dramatic (the accidental shooting of a young Kikuyu boy) and some tedious (the Masai quarrel over cattle) leaves readers confused in this world where everything is assigned the same weightiness of importance. Long sections are spent describing tribe quarrels or fascination with a cuckoo clock, yet only articles on the Internet reveal the significance of Hatton in the tale, who is quite a lot more to the Baroness than a mere friend.

And so, it’s with the shambling of narrative and the disorder of content that a memoir with so much vitality is oddly dimmed. Enjoyable to read, Out of Africa is nevertheless difficult to remember after reading. The soul the Baroness imbues in the tale tells us of greatness, yet her reticence to allow us into her life keeps readers concentrated on more daily details and  quarrels than on the people who populated her world.