On the Bright Side, I’m Now the Girlfriend of a Sex God (Confessions of Georgia Nicolson Book 2) 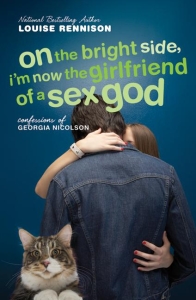 Another Side Splitting Teen Comedy!

Life for fourteen year old Georgia Nicolson is anything but easy. Angus, her ferocious cat, is bent on terror and love of the Burmese sex kitten next door; Libby, her baby sister, piles into her bed nightly with scuba diving Barbie, kitchen pans, and some less savory food items; Robbie, aka the Sex God, has cut things off, believing that Georgia is just too young and it looks like he’ll return to Wet Lindsay instead. Jas, well, she so obviously doesn’t care because her boy will be away for a whole week and she cannot concentrate on anything else. Add to these capers a mother suddenly smitten with a George Clooney look-alike doctor (and loads of doctor visits for Georgia), a father off in Kiwi-A—GoGo land is scheming to bring his family overseas, and various schemes to buck the school uniform (i.e. the beret) fail. Continuing from the laugh out loud charm of the first novel Angus, Thongs, and Full-Frontal Snogging, On the Bright Side, I’m Now the Girlfriend of a Sex God provides the near stream-of-conscious, minute by minute details of Georgia’s angst-ridden existence and her witty understandings of the elusive male species.

Determined to re-capture her true love (and reclaim her failing snogging skills), Georgia decides to become a man-killer and show her true maturosity. Armed with some articles and definitions of the entire male tendency to do the “rubber band” thing, Georgia ducks Kiwi-a-Gogo land and races toward a passionate relationship . . . that’s mostly in her head.

It’s difficult to review a witty book. Everything seems trite when you try to express the absurdity of teenage years mixed with a certain lovability within our ever cynical character and her crazy world. Cuddled in bed at night, I was able to let my own maturosity go and relish a moment of pure, unabated absurdity. With that absurd British humor (recall Monty Python folks), Georgia’s mundane teen world takes on a vibrancy of the very worst tragedy. She’s overdone, and we love her. She symbolizes all the bad elements of teens culminated into one character, yet we love her and ok, ok, get kind of caught up in the drama a bit ourselves. Shut up.

I could imagine falling in love with this world as a teen, and as an adult woman I must admit (ducks shamefully) that I enjoy the world even more. The witticisms and come-back sentences, the verve and energy, and most importantly the antics of Angus, keep the narrative fresh even though, really, it’s the same sort of thing from the first book. We all know readers didn’t get enough in the first novel, and we’re happy to see our heroine unchanged and ready for more adventures in romance.

And you know, really, that’s it. This book is fun, will have readers laughing out loud and quoting pithy sentences, and completely engaged in the world of a teenager. And no, you don’t have to read the first novel to get a sense of what’s going on in this one – but I highly recommend you do. I’ve already started on the next novel and just admit, Georgia Nicholson’s confessions are my new guilty pleasure. Highly recommended.