Land of the free, home of the brave… 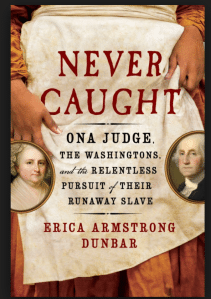 American history has no shortage of heroes.  But sometimes the brightness of the light focused on the most acclaimed individuals blinds us to the amazing accomplishments of other heroes in their orbit.  So it was with a young woman named Ona Judge, who with one quiet act provoked the first president of the United States.   Historian Erica Armstrong Dunbar tells her story of courage and strength in Never Caught. 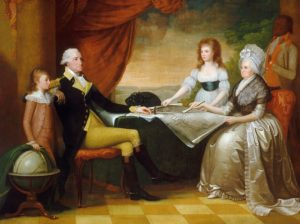 President Washington and his family.

Having been enslaved her entire life, Judge was Martha Washington’s chief attendant – combing her hair, mending her clothes and addressing her every need around the clock.  She spent her early life at the future president’s Mount Vernon estate in Virginia, but in 1789 she followed his family to the capital cities of New York and then Philadelphia as a member of the new president’s household staff.  It wasn’t until May 1796, at the age of twenty-three, that Judge had the audacity to simply walk away while her owners were busy hosting a dinner party, silently claiming her freedom and sailing away to New Hampshire.  The president – the most powerful man in the nation – would spend the rest of his life trying to get her back.  As the spoiler title tells you, he failed. 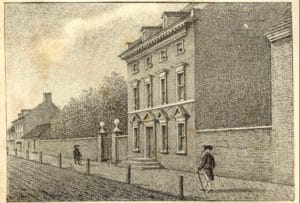 The Washington presidential residence on High Street in Philadelphia.

If it wasn’t for interviews that she allowed in the 1840s, long after the events in question, very little would be known about Judge’s courageous story.  Dunbar takes those sources and adds a fully fleshed historical backstory to create a meticulously constructed and fully compelling narrative.  She does a great job helping the reader get into the minds of the primary characters.  As she describes the many hazards that Judge faced, the author also effectively conveys what Miss Judge must have felt as she faced them entirely on her own.   At the same time, she reveals the contortions that the Washingtons went through as they tried to regain control of their “property” while navigating the political minefield that Judge had placed them in.  It’s a truly incredible story, and the author makes the most of it.

Throughout American history there have undoubtedly been countless similar stories of attempts at freedom – some successful, others not – but most of them will never be known.  Fortunately, Ona Judge’s quest has become the stuff of history.  Using only her wits and a deep supply of courage, this young, illiterate, enslaved woman knowingly took on the most powerful man in the country.  Full of riveting history and passionate storytelling, Never Caught successfully captures just how remarkable this brave woman and her perilous quest really were.  Highly recommended.

Check out some of Dave’s other reviews of books about slavery in the US:  Barracoon   /   The Counter-Revolution of 1776   /   The Half Has Never Been Told   /   Twelve Years a Slave