Knocked Out by My Nunga-Nungas: Further, Further Confessions of Georgia Nicolson 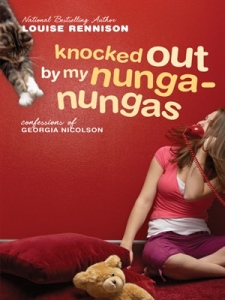 Further Tribulations of a Teen in Snogging Withdrawal

Life isn’t always easy when you’re the girlfriend of a Sex God, especially when your rock-band older boyfriend might leave you a pop widow thanks to a record deal. But that’s not all. The love-bird parents are determined to take Georgia away from delightful snogging for some vacation time in Och Aye land (aka Scotland in Georgia speak) and it’s going to be so boring. She’ll be going through snogging withdrawal and everything.

Back home from a bummy vacation, the snogging withdrawal is having some crazy and unplanned effects. Dave the Laugh, Georgia’s ex-beau, is getting fairly amusing and that girl he’s with now, even though she’s Georgia’s pseudo-friend, just can’t appreciate his special kind of humor. The Sex God is ignoring her for his record deal. Wet Lindsay is hanging around. And Angus just might get his trouser snake snipped if he can’t leave Mr. and Mrs. Next Door’s Burmese sex kitten alone. Add to this the usual mess of Libby, and you’ve got a difficult, complicated situation that’s going to require a lot of maturiosity, Oh, and did I mention the dishy new French professor? Now surely, the French don’t think just one boyfriend is enough, do they?

Full of verve and wit, Knocked Out by My Nunga-Nungas (which incidentally is a hilarious boob reference), Georgia’s minute-by-minute diary entries, captures all the trials and tribulations of a teen just discovering boys and snogging, while being mired down with dim witted parents and messy siblings. Georgia’s presumed maturity, plus her speculations on everything under the sun from sex to summer vacations, keeps readers entertained and in a nostalgic good humor. We can all shake our heads along with Georgia and the memories she brings up (the snogging scale being my personal favorite laugh).

Feeling quite the vixen, Georgia just can’t leave things alone and the drama is both side-splitting and oddly entrancing. You just have to know what happens to our beloved, misunderstood Georgia (beyond her epic hours-long makeup preparations for parties.)

Of course, always a favorite, Georgia’s holy terror of a cat, the more than semi-feral Angus, keeps the action and adventure endearing and slightly dangerous. Can Angus be tamed? Will a well-placed snip make him less devious and more family friendly? Can Georgia ever forgive the assault on her delightfully vicious pet? Isn’t he just going through pain and withdrawal similar to her own snogging slump?

The writing is dynamic, conversational, and all-Georgia. While the –osity addition to words is a little over done in Nunga-Nungas, the jokes, interactions, and strife remain true to the world we’ve come to love. Georgia’s voice is so clear, so ultimately endearing, that despite all her drama (which hell, let’s be honest, we love her for) she’s really quite relatable. Georgie is our insecure teenage side which, let’s face it girls, does that ever quite leave us? Light-hearted YA meant for teens, I’m going to go ahead and admit that this book is an addicting pleasure for us adults. Highly recommended!–