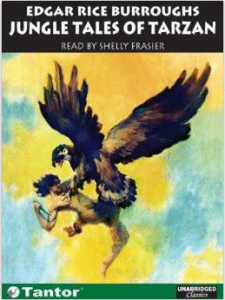 Prowling around the library, after promising myself diligently that I would pick up my holds and then leave, I stumbled onto Jungle Tales of Tarzan. Being enamored of books set in Africa in general and books set in jungles in particular, I was intrigued by the write-up which promised twelve loosely connected short stories documenting Tarzan’s youth in the jungle. I’ve heard of Tarzan (really, who hasn’t.) Researching for my novel, I once looked into a possible trip to the Congo (DRC); I read on one website a humorous comment stating that visitors shouldn’t expect cable and beer nor should they think of swinging through the jungle like Tarzan. These memories flitting back, intrigued, I picked up the audio book, figuring that short stories would be a good introduction to this long beloved classic.

The sixth edition to Edgar Rice Burroughs  acclaimed Tarzan series, these short stories go back in time before Tarzan’s civilization by Jane to his teenage years growing up among a tribe of apes. The stories document Tarzan’s first love (a she-ape), his realization that ultimately he is different and doesn’t belong, his continual baiting of a nearby tribe, and various adventures he has with a young cannibal boy and his mother. Depicting a brutal world, this isn’t the Tarzan starry-eyed Africa lovers (myself) like to envision – a man surrounded by the beauty and bounty  in a natural world; I always saw Tarzan as the good guy – rescuing hapless travelers and tribes alike. However, Jungle Tales of Tarzan presents a darker, albeit probably more realistic, depiction of a man raised sans morals – a man enticed by the world around him but also cruel in the way of a child – vicious from boredom.

Originally published in 1919, readers come into the tale with two expectations: one awful and one pleasant. Any novel written by a non-African about Africa at this time is inevitably racist toward the indigenous peoples, with a sort of “manifest destiny” outlook on Africa as a new continent to be taken; of course, varying degrees of this sentiment are evident in older works, some only touching and then flitting from the subject, others becoming deeply engrained. The second assumption is that this being an older book, certain elements of sensationalism, such as graphic violence, would be frowned upon. My first assumption was exceedingly correct, my second shockingly wrong.

The “natives” evince the “noble savage” aura and, liberally peppered with authorial commentary we find out just how inferior in intellect and imagination these people are from the white man, even the bestial Tarzan. Naturally, the “blacks” are cannibals and every adjective used to describe them speaks of animal ferocity and dumb cunning. It’s disgusting. The ever constant, unrelenting degeneration of the people, who ultimately in the stories prove to have more actual feeling and love than Tarzan (ironic, huh?) leaves readers repulsed. Even the more intriguing aspects of the stories (i.e. the witch doctor) aren’t enough to overcome the blatant racism which has readers at turns squirming and at other turns railing.  As I said, however, little else is expected of a book from this time period telling the story of a white man in Africa.

What was unexpected, even by the low standards of such a time, was the violence with which Tarzan attacks and often murders (yes, that’s right – cold blooded killing) the nearby villagers. Apparently, his inherent hatred ties back into the earlier books where his story (i.e. his abandonment in an African jungle, undoubtedly that of the Republic of the Congo or possibly Uganda from the descriptions, and his subsequent raising by the apes) conflicts with that of the natives, who kill his mother (the ape who raised him, who he presumes to be his mother.) Ok, understandable, somewhat. Why does Tarzan not track down the individuals who killed his mother? Instead, he continually “baits the blacks” for entertainment, and randomly kills them. One old man, at a feast, is thrown into the cooking pot by Tarzan. Multiple stories have Tarzan playing violent jokes on the tribes and laughing at them from high in the trees. Reviews I ran into on Amazon practically swooned over Tarzan, one even proclaiming him a hero. Hero? Really? He murders people, innocent people, and this is supposedly ok with everyone because the people weren’t white!!!

If the violence of constant, bloody human sacrifice isn’t enough to make readers uncomfortable to the point of actually hating our protagonist, there’s more. When not “baiting the blacks” Tarzan seeks his game in the jungle, killing and eating his food. Not surprising, he lives in the wild and is reportedly an animal himself, yet the long descriptions of hunting and killing his prey, eating them uncooked (really, the cannibal tribe are the only bad ones, really, really!?) The action and drama centers on a clever kill, a brutal fight, spears and knives puncturing flesh and fur alike. It’s disquieting. It makes Tarzan bloodthirsty, disgusting.  Readers cannot root for a character who has such little human feeling.

Between racism and violence, The Jungle Tales of Tarzan is a hard read. I rarely recommend editing a novel, but if a modern rendition could remove Tarzan’s violence towards the nearby tribes and his wanton taking of human life, readers could perhaps enjoy the stories more. There are some good elements. The writing is eloquent, for one thing, the descriptions vivid. The tale has a unique premise (although, falling in love with an ape and the very sexual terms used to describe her leave the readers wondering at bestiality).

Some of the short stories, despite my natural abhorrence toward certain elements of the tale did manage to keep my interest, although these stories didn’t focus on Tarzan but on Tibo and Mamaya (a young African boy and mother of the cannibal tribes). Mamaya and Tibo are empathetic, enjoyable characters and their encounters with the witch doctor, plus Mamaya’s bravery in recovering her son, hit those heart strings that Tarzan never touches.

Some other stories within the collection concentrate on Tarzan trying to understand the world around him; at various times something almost bordering on goodness enters him, against his will, and he does spare a few of the hapless tribesmen; Tarzan ponders God, and comes to a somewhat limited understanding that there is a moral world beyond the mere survival world he lives in. These thoughts are captivating as readers imagine what they would become, what anyone would become, if abandoned in a similar circumstance. The few glimpses into Tarzan’s past even made me a little curious concerning the first book in the series, which obviously depicts the death of his real parents and his coming into an ape tribe. Still, the irksome moments of the narrative are too frequent and too much to inspire readers to willingly return to such a harsh, cruel world. Ultimately, I was relieved to finish the stories and despite some of the more entertaining aspects, will probably never return to Tarzan’s world. Not recommended.

A Note on Edition: I listened to the audiobook edition of this novel as read by Shelly Frasier. Frasier’s voice resounds with an alluring, deep throated brutality that truly makes the fight scenes come alive with tension. Her immersive reading was one of the few reasons I was able to continue the tale, and if you just must read Tarzan, go with the audio book! Her voice for the sickly witch doctor is spine tingling and enjoyable.