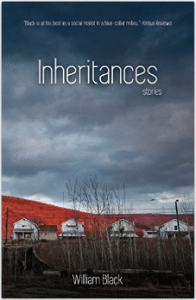 The End of Everything

“We told her what our father had instructed us to tell her. ‘We have been to the end of the universe,” we said. ‘We have seen the end of everything.’”

An austere collection of twelve haunting stories, William Black’s debut collection combines the nostalgic loss of innocence from To Kill a Mockingbird with the down-and-out brutality of mining life from How Green Was My Valley, coloring everything in a modern tinge of dirt and backwoods desperation. Raw, the words echo with the lairs of emotion beneath them: the moments of beauty and agony, despair and hope, desire for escape and the surrender to life. It is life in all its beautiful ugliness with all of those harsh lines hammered into the earth, here in the heart of fracking country where new machinery and science drives out the desolate coal miners. Inheritances is about moving on and all that is left behind, about the expectations and dreams that are passed down, the reality of change, and the incomprehensibility of the universe as people search for answers in all those daily moments that, ultimately, they will never understand.

The pink neon lights of The Pleasure Dome illuminates the world of a small child, a world where the father is out of work, dirty, and despondent, yet the promise of fake pleasure lures him on. Only the children see the cheap building, which they do not understand, as something beautiful, a colorful comet in a night sky, and only the readers see the sadness in their love for these broken things and the people who have no escape.

In “The Lion in the Hills” a man must confront his wife’s infidelity and the effect this will have not only on himself but his young son. Told in the second person, the claustrophobia of betrayal and finding out envelops a rich story where every blade of grass, and a special cage for his wife’s birds and animals, mirror the turmoil and the agonizing freedom of choices and mistakes.

In “Leaving,” a man locked outside with a broken down car in the middle of a downpour stares into the empty apartment of his mistress and thinks of the wife he gave up. A slow walk in the cold rain, a crushed bird, and an old lady needing a cigarette combine to reveal the foolishness of decisions and the inevitability that once something is left it can never be gotten back.

In “Architecture,” an escape is thwarted by fear of leaving, and a man and his wife fall in love with the home they have always hated. Their world seems idyllic, rich, full, yet something seems to be missing, perhaps an absence created by desiring too much. Meanwhile, two homeless women abide in each other as the strange narrative combines to show that really, none of us truly have anything in the end except our perceptions and expectations.

“Ad Astra Per Aspera” examines how our fears manifest through our actions. A drunk woman who sometimes slips into nonsense speech of “talking monkey,” fears what her lapses truly mean and remains captivated by a past that won’t let her go. Her boyfriend understands, and the story merges between terror and the hope we have that others will at least try to save us.

I could keep going on. Each story is a flash of life, a moment in these degenerate mine town’s with their desperate denizens. Each is desperate in his or her own way, the rich and the poor, the drunk and the sober planners. It’s raw writing, an open wound reminding me of the movie Winter’s Bone with its down to earth mannerisms and insight into the quests that lead people down the paths they follow. It’s literary but never pretentious. The messages in each story are from the reader, not the author, who paints this grand canvas of living and allows us to examine it, to wonder why, and why those people, and why this character, and finally, why me. There are no answers, only questions, moods, brief moments of almost-understanding, and comforting moments of oblivion, darkness, the cheer of a dark bar after a long day and the forgetting. This is what stands out most in Inheritances – all the forms of escape and yet our inability to truly leave demons behind. Inheritances is about how we tie ourselves to this earth and all of her dying places and long gone ways of life, and how, through it all, we keep surviving and seeing those stark moments of beauty in the end of everything. Highly recommended.