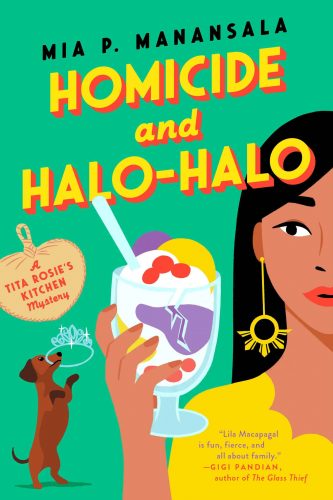 Lila Macapagal finally has her dream, but after her near-murder and the lingering effects of her previous investigation, life has become a nightmare. She is about to open her new café with her best friend, Adeena, but her mind is caught back in time. She can’t cook, she can’t make new recipes, and she can’t move on. What she needs to get back in touch with herself and her friends and family is a good distraction . . . and that distraction has just come to town.

As a former beauty queen, Lila has been asked to judge in the upcoming Miss Shady Palms Teen Beauty Pageant. Between the in-fighting, the beauty moms, a slimy judge from a rich family, and Lila’s own bittersweet memories of her mother, she won’t have time to remember her near death. But she might accidentally reenact it. It seems that one of the judges has a powerful enemy, and when he winds up dead and someone begins to sabotage the show, Lila steps right into the crosshairs again.

Homicide and Halo-Halo is a strong and somewhat sobering follow-up to the promising new Tita Rosie’s Kitchen Mystery series. While Arsenic and Adobe mostly kept the cozy mystery light, author Mia P. Manansala chose to go with some more realism here and show the after-effects of trauma. This helps us get to know Lila at a deeper level as she struggles away from the wants and demands of her friends and family and starts to sort through not only the original homicide in her family’s restaurant, but her own simmering rivalry with her cousin, her falling out with her best friend, and her potential love interests. Along the way, Lila meets other women who are dealing with the fallout of murder and accusation, a bevy of workplace hostility, and racism. The problem is that these new comrades may also be potential murderers, and as Lila works through her own trauma, she begins to suspect everyone around her. And she’s not wrong.

I’m not much for the beauty pageant scene, and I admit that I was less than excited for Lila to get involved in a world that I frankly find shallow and demeaning. But it works. What a perfect place to hide issues in plain sight. This pageant focus gives Lila a chance to open up further to readers and to discuss her mother and family issues. This takes a character who was already vibrant and gives her a real depth, making us empathize with Lila. It also gives us scores of potential suspects. After all, the dead judge made a whole lot of enemies – his wife, his sister, all the contestants, and the contestants’ moms . . . pretty much everyone really.

The mystery itself is easy to figure out and the showdown is typical cozy mystery – a near disaster that is brilliantly and inexplicably saved with just enough time for some hugging and weeping, a teary lesson about controlling moms and “just wanting the best” for your child, and an everyone-is-friends again makeup. And you know what? That’s great. That’s what I come to cozy mysteries for, and I loved every second.

I’m excited for the third book in this series. While I liked the depth that sadness gave the characters here, I’ll be excited to see Lila even out, find some inner sparkle again, and maybe (hopefully) chose a guy. It will also be interesting to see the new café, which was a weird (and unpleasantly witchy sidenote) grow a little more in following volumes too. Here’s to more mystery, a little bit of good-natured investigation, and murder most foul!