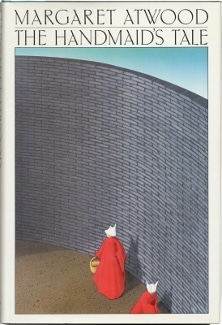 I make no secret of my love for dystopian future fiction.  Said fiction usually takes the form of some highly unrealistic post-apocalyptic society that can only be saved by an intrepid teenager.  Because really, grown-ups in dystopia suck.  But once in a while I chew on something a little weightier – something truly dystopian, highly disturbing, and terrifyingly possible.  AKA, Margaret Atwood’s brilliant 1985 novel The Handmaid’s Tale.

The Handmaid’s Tale takes place in the near future (that it was written in the mid-80s matters not at all) where American society has collapsed due to unnamed events or forces and has reorganized itself into the horrifying world of Gilead.  In Gilead, our main character, whose real name we never learn, is a Handmaid. The Handmaid’s job is to be a surrogate for childless couples in which the man has a powerful position in the government.  There’s a lot of infertility in Gilead, so women who have borne healthy children are a highly valued commodity.

I use the word commodity intentionally, for these women have no choice but to act as surrogates, receive no pay, are shunned by all other castes in this society and can be cast aside for the slightest infraction.  The conditions under which impregnation is attempted are barbaric.  Handmaids wear red – to set them apart, shame them, condemn them for being fertile – and are expected to be silent, as are all women, who have no power here, no money, no property, no choices and no chances.  All women are property, but Handmaids are both revered and despised.

Our story is told in the first person by one Handmaid.  She describes her days, the culture in which she must live, the things she was forced to give up.  We’re still close enough to whatever event signaled the end of basic freedoms that she remembers the time before, and lives with the memories not only of that freedom, but of the brutal and oppressive “training” she had to undergo to transform from her past self into a silent, obedient Handmaid.

The book is heart wrenching in so many ways.  We are witness to one woman’s agony as she is forced to live in slavery.  Atwood is also extremely adept at hinting at the cause of this devolution without describing it in enough detail that we can separate it from our own culture.  Every debasement, every loss of autonomy and freedom, every elevation of the mediocre based on everything other than merit, is something we can find an example of in our society today.  So too she alludes to the destruction of the environment, the use of religion as a weapon, the obsession with safety over freedom, and the willingness of the people to hand control over to tyrants out of fear, only realizing their grave error when it’s too late.

When I read The Handmaid’s Tale for the first time, some five or so years ago, it was hard hitting and the sort of book I wanted my daughter to read so her generation would never take the advances in women’s rights that had been made before her birth for granted.  In 2017 I see it as an immediate cautionary tale, for we are living in a time that has given voice to those who want to take from us basic freedoms, who want to divide us using fear, who would tear down a society in order to attain money and power.  It’s no longer a book that makes us cluck our tongues and think, “Such a thing could never happen here.”  Instead, as you read, you will be struck by how similar some of this society’s rules are to those you now hear suggested openly and without shame by politicians and other public figures.

No matter what your political views, I urge you to read The Handmaid’s Tale.  Imagine how Gilead got where it is when this story takes place.  Then look around you and identify those who would use those same tactics to silence dissent and control your actions, your choices, and your future.  Then speak up, and don’t stop speaking up.

The Handmaid’s Tale has been banned in various places since its publication, for a variety of reasons including depictions of sex and godlessness, offensiveness to Christians, and immorality.  Don’t believe any of it – those who seek to ban this book are those who fear it, those who don’t want high school students (or others, but it’s a lot harder to ban a book from adults) to look too closely at the world around them and see how casually women, people of color, and other minorities are cast by the powerful in our society as disposable – things to be used, owned, and discarded.

Margaret Atwood wrote a stunningly prescient story of “morality” run amok in The Handmaid’s Tale.  From what I hear, the Hulu series based on the book manages to channel the power of the novel, and I certainly intend to watch it.  It won’t be easy – just like the book isn’t easy.  But it’s worth it for the reminder that we must not and cannot ever take for granted the freedoms we have.  If we do so, Gilead isn’t that much of a stretch. 5 out of 5 stars and a “must read” recommendation for Margaret Atwood’s The Handmaid’s Tale.