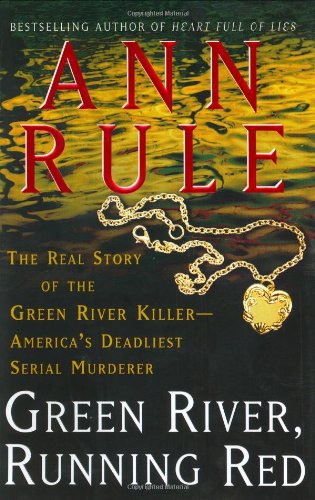 An Incredible History, A Dull Telling

Long before I went from finding true crime ghoulish to fascinating, I’d heard all the applause for Green River, Running Red. Once I joined the true crime bandwagon, I kept remembering this title and decided it was time to try it. I’d read other Ann Rule books in the meantime, namely The 1-5 Killer, and loved the way she told a story, making it a true narrative while never loosing site of the facts. Her nonfiction read like a novel, but it had the poignancy and terror of facts.

Green River, Running Red is one of Rule’s most lauded books. The Green River Killer was prolific for over two decades, ultimately killing more than forty-nine confirmed victims. The investigation started and stopped, going off on tangents. Officers interviewed the killer multiple times, but ultimately kept missing him. Meanwhile, more and more prostitutes were targeted and killed . . . but what could they do? They needed money. They needed to be able to live. It’s a horrible culmination of brutality and tragedy, a story that should echo with pathos, yet Rule’s telling here is bland, unfocused, and ultimately makes a two decade reign of terror boring.

As Rule writes it, the Green River Killer case effected her most of all the cases she has followed and written about over the years. At the end, it is revealed that the killer had come to some of Rule’s talks about him and even lived within a mile of the author. All the time she was tracking him, collecting information to write in her blockbuster book, he was in plain sight. It’s clear that the case moved Rule deeply, that the victims were no mere names to her, but living people with lives cut horribly short. Rule introduces each of them, goes through the details of their lives, the how and why they chose prostitution, the grape vine knowledge circulating among the sex workers, and ultimately the details about each woman’s family. She states that this is a testament to the girls, and it truly is, yet her laser focus on them is haphazard, making it impossible to track time, to follow the growing list of characters: some potential victims, some potential killers, some police, and some extended family. It soon becomes a muddle: names and stories that go nowhere, dramatic jumps in the timeline, and very little information about the investigation or the actual killer. As I lost track, I lost interest, checking the Audible, desperately wishing for it to end and miserable at the hours left.

It’s very strange that such an epic story could become so boring, but it was. And our ultimate questions are never really answered: why did Gary Leon Ridgway (the killer) do what he did? Of course, there never is an answer to such a question, but Rule’s choice not to glorify the killer with attention also makes the book less readable, the narrative ultimately not coherent. By the time I met every suspect, every woman who came near the Green River Killer, and heard about every re-draft of Rule’s narrative, I’d entirely lost the thread of what really happened and how it all ended. I faded in and out of listening, and if this had been my only reading of Rule’s work, it would have been my first and last. I’m not sure why Green River, Running Red was (and continues to be) touted so highly. Not recommended.