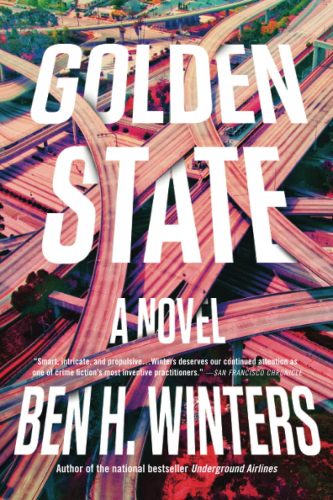 The State of Truth

In Underground Airlines author Ben H. Winter forced us to examine the relentless nature of the past, the violence of survival, the horrors of government and technological oversight, and the skewed nature of our individual moral compass. In Golden State, he’s back to do the same. To take the world as we know it and flip everything, to make us question past and future, our motives and morals, and the lies that we take for granted.

In Golden State truth is law – literarily. To lie is more than to sin. To lie is to jeopardize the Objectively So, the facts that undergird reality and, therefore, the all-knowing Golden State. To lie is to risk being found out and punished, harshly. It’s the price for surety. For a world where words mean something, where facts are tangible and provable, where the past is unknown, archaic, and utterly dangerous. The former civilization, the United States, didn’t value the Objectively So and some unknown apocalypse, some anarchy caused by half-truths and blatant lies, nearly destroyed civilization. So those remaining learned from their past. Now, truth is everything. Truth is worth dying for. Truth is worth killing for.

In this totalitarian world where a trivial lie can result in exile, we meet Lazlo Ratesic, a man with an almost supernatural power to sense a lie, even in a crowded café, even among the hustle and bustle of daily city life. With this great power comes great responsibility. Lazlo is a 19-year veteran of the Speculative Service, a top-notch FBI like agency that is responsible for upholding truth at all costs. After the death of his brother, a far greater Speculative Service agent than the so-so Lazlo, our anti-hero prefers to be aloof, to do his job, to file the endless paperwork that each citizen must have to prove that everything, down to how they spent their day, those they conversed with, and what they bought is documented and verified. And of course, Lazlo is allowed the one great privilege of his position: he can speculate; he can fabricate to figure out complex truths and solve crimes. He can step outside the Objectively So in order to protect it and society.

Right before the eve of a seemingly normal, although tragic accident, the aloof Lazlo is given a sidekick, a new woman who has come to the force with indisputable talent to sniff out a lie. This fellow speculator is a little too keen, but ultimately right. Her instincts point Lazlo towards a terrifying truth, one that undermines everything he has ever known, everything he has ever trusted, everything he has ever believed. If truth, if the Objectively So, cannot be trusted, then what can? If reality is fake and someone is manipulating it, how can civilization survive?

Ben H. Winters has a talent and a knack for dystopian fiction. The worlds he crafts are parallel to our own, and through the foibles of our own times and the horrors of history we can easily imagine these alternate realities coming to life – these bleak worlds with their well-meaning, autocratic individuals inhabiting our own spheres. The Golden State is no exception, although unlike Underground Airlines, it relies a bit more on the supernatural than the technological and governmental. There is still plenty of internal corruption, the underbelly of a proclaimed utopia that is rotting from the inside out.

There are some parallels here with 1984 – an idea of big brother watching and dictating everything. Only now they can even invade your thoughts and intentions with the help of this Speculative Service (anyone notice that the initials are SS?) The only problem is that this eerie power, and the fact that it didn’t always exist and now often comes with a physical price, is never explained. In the conclusion, the ground for the Speculative Service’s famed abilities becomes even more unstable, the ultimate question leaking around the untidy edges: is any of this real, or is it all brainwashing at its most advanced?

In the end, we discover some of what we expected (corrupt government, much), but there are also some weird twists that aren’t entirely explained. We have a Days of Our lives like resurrection, a betrayal that does not fit, and a psychic power that fluctuates with the needs of the plot and belies its imperfect nature. Yet, despite all this, the story is still powerful and immersive. Any book by Winters takes on a life of its own, and while it chills and warns us, it also endlessly entertains with its corrupt yet still vitally good characters. Golden State is no exception. It’s another heart pounding, thought provoking piece that uses a far flung but not impossible future as a vital warning. Wake up, before it’s too late.