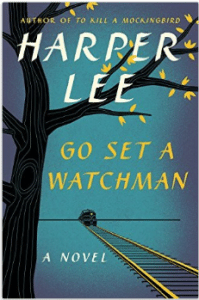 The Racist Sequel for To Kill a Mockingbird

Fifty-five years after the iconic classic To Kill a Mockingbird delivered the heart-rending trial of Tom Robinson, an innocent black man accused of raping a white woman in the not so long ago Deep South, Harper Lee gives sedate readers everywhere a shock. In the strange world of sequels/prequels/left over drafts stored in vaults somewhere, the original story of Scout, Atticus, and the racially tense town of Maycomb, Alabama are drastically altered and ultimately more confused. As everyone who has an internet connection already knows, Harper’s original draft, Go Set a Watchman, was rejected by publishers who, nevertheless, saw gleams of originality in the childhood flashbacks of Scout and set Harper on a new track which lead to To Kill a Mocking Bird. As such, while Go Set a Watchman occurs two decades after the events of Mockingbird, the “sequel” is essentially a different story. Not even traditional characterization is safe and while the claim to fame is Scout, this rendition of Harper Lee’s story is evidentially an early, unsuccessful draft searching blindly for the flame of inspiration that occasionally leaps from otherwise stifled pages.  The moral of the story? When you write a best seller that becomes a classic, do not reveal unpolished previous drafts to a public already set to be highly critical and greatly disappointed.

The novel starts with Jean-Louise Finch, a more liberated version who cusses with impunity and talks about her on-again-off again relationship with Hank in flippant, teenage terms. This twenty-six year old woman who still acts like a tomboy is on her way from New York to visit her aging father Atticus, the famed attorney and stubborn man who resists infirmity. Jean-Louise gets more than she bargained for when arriving to discover that her hometown has changed. Calpurnia, the black housekeeper/defacto mother of her youth, is bitter, resentful, and withdrawn. Her close relatives, including the ever proper Aunt Alexandria are using the “n” word, and a city council has been established in the sleepy southern town to deal with the black problem and keep the old ways. When Jean-Louise stumbles into the council to find Atticus, her entire world, including recollections of her father’s defense for a black man, is overturned and she must confront  not only the political reality of her day but the loss of respect for a parent and consequential destruction of an idol.

Racial tensions, family ties, and the disappointment other humans cause us remains the central focus of the tale, so in that way the novel hits the touchpoints of Mockingbird without covering the soul. The book feels lost and, according to my trusty Kindle, the discovery of the council and Atticus’ involvement in prejudicial activities doesn’t occur until the 55% mark. The first portion of the story merely establishes the general malaise of returning home and Jean-Louise’s drifting thoughts and introspections on minor details of life. There are some interactions, including devised arguments, with family members and Hank, yet the novel has a shaky feel, as if it’s trying to get a toe hold and can’t quite figure out where or how to begin its journey.

With the discovery of the council and Atticus’ racism, the story does finally take off. Jean-Louise begins to examine those around her and what she thought she knew about them. Atticus, in the stunning destruction of a previously well-known character turns out to be a member of the KKK as well, and the narrative transitions into a mostly dialogue driven exercise where family members attempt to justify racism. Jean-Louise is left to make her own decision, and the growing point of the novel is her awareness of differing opinions and personal choice to hold her own. She retains respect and love for those around her, despite having a period of time where she desired to run away from Maycomb and her father; in the conclusion, she even begins to harbor some of the same indoctrination in that she agrees with her father and Dr. Finch (uncle) that her boyfriend Hank isn’t “of her kind” (i.e. white trash) and therefore not acceptable for marriage.  The resolution is rushed, the tranquility after the storm manufactured, the decision on Jean-Louise part nebulous, and the moral even more so.

The Radleys, Jem, and Tom Robinson are not in the story at all, other than brief mentions of Jem and a hint about the trial, which is merely an aside in a winding sentence. Even the language of writing with the forced southern dialect (all the ending in n’ such as creating words like smackin’ and somethin’) lacked the subtlety of Lee’s later work, and the inclusion of sons-of-bitches as a curse word shatters environment we’ve come to expect from Scout’s world. Early on, I distanced myself from expectations of Mockingbird’s world and instead pretended I was approaching a new story with different characters. It’s really the only way to accept the altered situation in this strange, parallel universe of a world.

Equally as peculiar is the general unfinished aura of the novel. It’s evidently a draft – an early draft. Pacing is all over the place with an unnecessarily long and useless intro and seeming plot holes missing during later portions of the novel. Like a skipping record, we get some of the words but miss out on the presentation and the texture of the drama, leaving readers to wonder at the fragmented bits. It’s hard to understand then, the novel’s main point, when it feels so unpolished and incomplete, as though someone were outlining a rather good idea that simply languished.

Sitting on St. George’s Island beach beside the boyfriend, toes dug into the warm sand, I read Go Set a Watchman as a beach book, and enjoyed it on that level. The depth and quality, the introspection and deep moral questioning of Lee’s Mockingbird isn’t here. As a wanna-be author, I was relieved to see that even amazing, classic authors have stuttering drafts before the masterpiece and as a literature fan I was curious to dabble in Scout’s alter-reality. For these reasons, I enjoyed Go Set a Watchman, yet if the novel had no association to one of my favorite classics and the famed Harper Lee, I believe my reaction would have been more definitively negative.