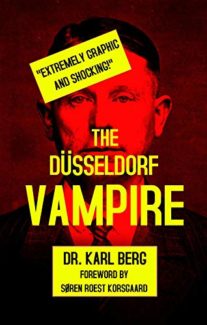 My recent excursions into true crime lead me to The Dusseldorf Vampire, a book that was published in 1938 by psychiatrist Dr. Karl Berg. It covers the confessions of Peter Kürten, a particularly vicious serial killer who rampaged for multiple years across Germany.

This was my first encounter with Kürten, but despite the ominous red filter used to highlight a man who looks like he stepped out of another time (which, of course, he did) and the “extremely graphic and shocking!” label proudly smacked on the front, I was sure that I was more than ready for whatever sensationalism Dr. Berg was ready to dish out. I’ve 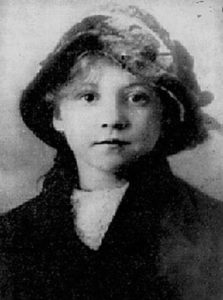 read books about Gacy, who hid bodies under the floorboards, and the book that started my new genre love, If You Tell, handled some seriously disturbing sequences of childhood abuse against several half sisters. I may be new to the genre, but what I had read was certainly not easy topic-wise. I was NOT prepared for Kürten. I’m still not sure I’m prepared for Kürten, and while this slim little book is written in the bland, clinical tones of a man interested in science (the content isn’t sensationalized at all), it’s too much. And it’s only really just an overview of Kürten, what he thought and did.

First – reader beware – there is an autopsy picture of a child in The Dusseldorf Vampire. I did not know this going in and when I ran into it I immediately wanted to stop reading. I guess that just showcases my own hypocrisy, but somehow seeing the photo brings home the fact that the material is no mere story to tantalize and terrify. This happened to someone – a child no less. And that’s just the beginning of Kürten’s terror.

Dr. Berg spends a good half of this incredibly (mercifully) thin book (a mere 138 pages) going over autopsy reports and laying out how many centimeters apart the wounds on each victim were located. This is hardly interesting for the average reader, although thankfully it is so scientific that it divorces us from the all-to-real human trauma . . . until the unfortunate picture (which isn’t super graphic, but it’s a murdered child) is dropped. 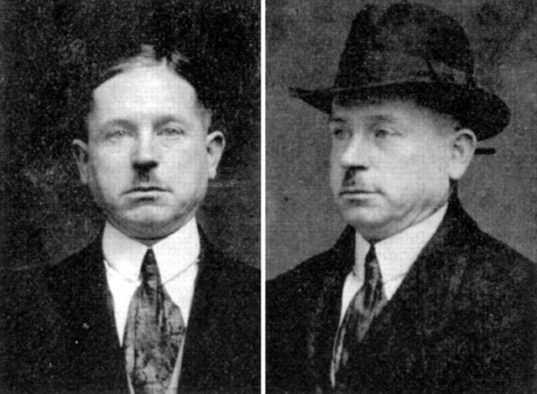 When Dr. Berg shifts from the reports to the actual man, he mostly lets Kürten speak for himself, which highlights the pure brutality of Kürten. Kürten tells his murderous history point blank, much like you’d narrate a grocery list, devoid of any feeling. But what he says is horrible. He murdered and raped numerous women AND several children. He talks of how the act of murder, specifically seeing the blood, lead to sexual satisfaction, which left Dr. Berg to add a few side notes about the type of serial killer Kürten is and how that works into the psychology of the individual. Dr. Berg rarely interrupts though, and while he gives a few instances of his own thoughts (and marks when he thinks Kürten is lying), he mainly let’s Kürten’s words stand for themselves. So, if you’re looking for a real explanation of the WHY behind Kürten and similar killers, you won’t find any answer to the mystery.

I suppose the truth is that there is some lure to the train-wreck of true crime, plus the tantalization of trying to solve a human puzzle and also address our darkest fears, as though by the knowledge of the hows and whys we can avoid a similar fate. But The Dusseldorf Vampire, while probably valuable from a scientific standpoint at the time, doesn’t shed light on any of our questions. Instead, it’s straight, in-your-face awfulness and the nature of what Kürten did (and his descriptions of raping and murdering children) is simply too much. This is one for only hardened true-crime addicts and perhaps those making a study of serial killer psychology and its development. Well done, for its actual intentions, but not something I wish I had read.