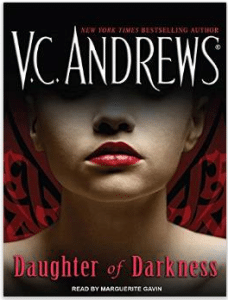 Daughter of Darkness: A Vampiric Nod to V.C. Andrews

Raised as an orphan, adopted into a brooding family full of secrets and sibling rivalry, Lorelei is trained as a seductress. As with her sisters, especially her mentor Ava, Lorelei is taught that love is a poison – but she doesn’t entirely know why. While the rest of her sisters are vying for Daddy’s attention and love, Lorelei is asking questions and prying into deep corners. When her training begins in earnest, she slowly unravels the layers of difference that should make her incapable of love. Yet, an illicit opportunity from a determined young man opens her not only to rebellion but to questions of right and wrong. Does she truly belong in the enfolding arms of darkness?

Credited to the famous V.C. Andrews, author of Flowers in the Attic, Daughter of Darkness has no actual ties to the original author who died after penning seven novels and leaving notes for four others. It has long been known that Neiderman, the ghost writer, has been capitalizing on the estate and the name of Andrews without having any actual content from her. Fans are greatly upset by this, and seem to rate solely based on the fact that the work isn’t V.C. Andrews, but simply a gothic inspired tale of sexual deviation (usually incest) inspired by Andrew’s convoluted family dramas. Regardless of the rights or wrongs of ghostwriting, it’s a known fact and doesn’t affect my decision to read, rate, or enjoy the book. A rose by any other name, and all that jazz.

Daughter of Darkness looked trashy in a seamy, somewhat scary way when I picked it up and perused the back of the audio book in the library. With a daily commute of at minimum two hours, I decided that something dark, sensuous, and not too serious might be an enjoyable break from my “100 Classics” tour. I expected little more than cheap thrills and atmosphere, and the over sexualized beginnings of the novel, with the tension heightened even to an almost homoerotic manner between the sisters seemed to promise the forgettable novel I expected. However, as the story grew and morphed, despite the clichéd elements and its attempts to even mock itself, the plot drew me in, the darkness enfolded me, and I found myself immersed in a semi-supernatural family drama that showcases a unique view on the issues of vampires, and above all provides for tension and betrayal. No, it’s not a classic. But yes, it is a very enjoyable read that plays on all the darkest recesses of the mind and unravels centuries old secrets. Plus there are vampires. And loads of sexual tension. And vampires. Did I mention the vampires?

Coming into her maturity, Lorelei is being trained by the eldest sister, Ava, who will soon be leaving for her own, unspoken adventures. Gradually inducing Lorelei into a life of shadows, Ava reveals tidbits at a time and provokes many tests to train and trap her younger sibling. Lorelei, through an incident of waking too early in her childhood already knows a bit about what makes Daddy so different and why her sisters bring home so many young men. Yet, the knowledge isn’t enough to explain the entire puzzle, or to even dispel the loneliness of a life devoid of friends. Tempted between being daddy’s little girl and falling into a world that is softer, kinder, and less barren, Lorelie experiments by playing both ends against the middle, with the result of a discovery, a betrayal, and a final decision. The questioning, revelations, and decisions facilitate high tension in the novel and cover over a wide range of sins. Ok, so maybe the dialogue can become corny at times and maybe the narrative is over sexualized. Still awfully appealing, if not for its better qualities, perhaps for its very preemptive baseness and the horror of an amoral world it depicts. It’s different, and Lorelei’s voice is captivating, her emotions both relatable and terrifyingly foreign at times.

The secrets themselves prove tricky, although not entirely predictable. The usual incest element, ascribed to Andrew’s Flowers in the Attic series is prevalent and while this seems to be the element that enthralls fans, it’s the one moment of sexualization in the story that I could have certainly done without. Disturbing for its own sake, yet forced and tawdry, this element hardly fits into the darker schemes of the novel and, frankly, goes down avenues readers just don’t want to follow. However, before potential readers scatter, let me warn that it is certainly more toned down than other books under Andrews name and there are no explicit incest scenes – only a hint of what were to happen and what has happened before.

Populated with an enthralling amount of angst, emotion, desire, and loneliness, the novel has a certain teenage aura to it that, despite my desire to stick my nose in the air and walk away, truly made the story. It’s the heightened emotions and the darkness that will either appeal to readers looking for a thrill or, as seems to have been the case with most, displease a more literary crowd. For my part, I feel right into the whirlwind and thoroughly enjoyed myself.

*A Note on Edition:  I listed to the audio book rendition of this work, read by Marguerite Gavin. Gavin’s seductive and expressive voice were especially conducive to this tale. Through her the characters spoke and Lorelie became a narrator who, however odd, was completely believable. The reading heightened the tantalizing aspects of the novel.