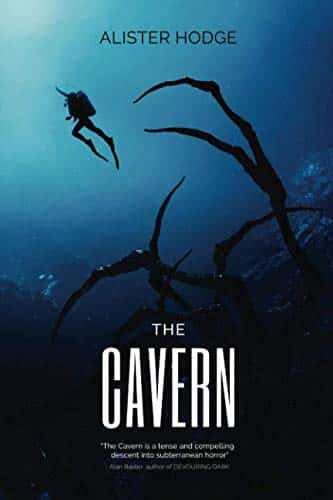 Everything in Australia Wants to Kill You

In an old mining town in the Australian outback, a sinkhole opens, revealing a brand-new cave system that draws adventurers and scientists. The adventurers get more than they bargained for, and soon the unknowing scientists, with their desire to be the first to chart the new system, legalities and safety be damned, will discover an ancient entity with awakening hunger and a vendetta.

I picked The Cavern because I adore the mystery and majesty of caves and am a sucker for all things creature feature. I was having hopeful visions of Caitlin Starling’s The Luminous Dead too, mixed with a bit more B-movie flair. You know – scary monster pitted against helpless humans in an isolated and intermittently cool environment. Throw in some gore, some creative monster maneuvers, and that everything-in-Australia wants to eat you premise, and I was excited for this guilty pleasure. The problem? By the end of the prologue I was bored, despite (or maybe because of?) how quickly the carnage was cranking and how much was revealed about the beastie in the primordial darkness.

The story gives away everything, and I mean everything, in the prologue. This means that there is no real horror, just a mishmash of high-octane action and literal eye-piercing gore. If you want a thoughtless rock-em-sock-em horror, then maybe The Cavern is your book. But I wanted to be scared, and I wanted to be curious. I wanted a puzzle, but the creature, which we come to know as The Miner’s Mother, is no mystery, and so essentially, we have no connection with the clueless individuals who haunt this story. We just sit back and watch them get picked off, slasher style, and soon we become bored. The deaths and dismemberments and maneuverings mean nothing. The characters are, after all, general stock.

We have the traditional couple, although their on-the-outs relationship doesn’t figure much. We have a few buff old men with traumatic pasts who are ready to be brave. A creepy woman with a dumb secret and weird obsession. Half a dozen future bait characters. A random jerk of a rich guy. A crooked cop. A barkeep with a good heart who knows more than he is telling, and a creature that is at times unrealistically, humanly aware and at other times simply and senselessly bestial (as the plot calls for it). The story is mostly just the action of different people being very stupid and going to their obvious doom, with the inevitable last stand mired with some weird Vietnam history.

I gave The Cavern two stars because ultimately there is a lot of action. But really, I doubt it even deserves that kind of a rating. For all the killing, it was boring and meaningless, and my mind drifted during the fight scenes, barely registering the deaths, forgetting even the name of the paramedic dude who was sort-of the main character. Not recommended.