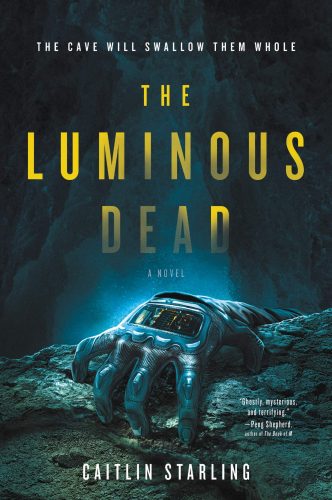 In the dark of a dangerous cavern on a foreign world, two women find themselves and each other. Gyre has always led a hard life on a bleak planet. Its caves were her only consolation and now, they are her only way to escape. She may be young, but she does have grit and some expertise. She hopes it will be enough to get her off planet and put her on the road to finding her mother.

Taking a dangerous job with scant information and a suspiciously large paycheck is no problem for Gyre, because she has things to hide. Like her actual job experience. But when Gyre gets her intestines re-routed for the special suit, when she finds herself literarily encased in the suit and left alone in a cave that has never been fully explored – a dangerous one with alien creatures, unlike the surface caverns she has previously explored – she starts to wonder if she should have asked more questions. When she realizes that there is no surface team watching her, no experts monitoring her stats, but only one recalcitrant woman, Em, she worries even more. Who watches for Tunnelers while she sleeps? Who protects her? When she finds her first body, the worry turns to acute fear. Just what has she agreed to and can she back out? But if she does, can she ever get another caving job, ever find her way off world?

Meanwhile, Gyre’s handler, Em, has her own secrets. She knows about Gyre’s lies and soon, she knows the why behind them. As the two women engage against one another in the haunted lairs of the cave, a game begins to spool out, one of half-truths and tenuous emotions, of damage and psychological scars, of grief and rage and everything in between. As Gyre forcers her way deeper into the caverns, into the luminous darkness of rocks and spores, her relationship with Em morphs, the hate turning to love and back again, the isolation and the paranoia working on her. As supplies disappear and more bodies appear, Gyre begins to suspect that she is not alone in the cave and that even now Em hasn’t told the full truth.

The Luminous Dead is a tense grappling with isolation and brokenness, with the desires of the heart and the weaknesses of the body. As the story unspools, the cave slips away. It’s not the real enemy here, but the humans who invade it, who come to die in it, are their own enemies, whether they have made the descent for greed or for something else. The dialogue between Gyre and Em guides the story, and as the bareness of the surroundings, the sucking sumps and the nearly impossible climbs take their toll and Gyre’s suit begins to malfunction, the reality of death in the dark, ultimately alone, overshadows everything. It’s an emotional journey, one that is fraught with its own depths and defensive heights, and something about the language and the lies, the toxicity that ultimately brings the two women together, makes a perfect connection.

And then too, there is the cave itself. It has seen so much death. Scientifically, it is ultimately unknown, from the range of fungi that can sprout in it to the animals that may live and breathe beneath its surface. It is alien and hostile, although outwardly just a cave. At least, for a little while. But there are hints here of an other, whether that is the other of our psyche, the breakdown from being alone so long, or another other entirely. We even get to finally see the spectacle of the fabled Tunneler, but more importantly, we see the devastation of grief and desperation as it works on Gyre and as something else, maybe something imagined or something entirely real and malevolent tracks alongside her. As equipment is ruined and rations taken, the stakes up and Gyre is in no mental place now to make decisions, to parse what Em is telling her, to reign in her failing emotions and slowly shutting down system.

The Luminous Dead is more of a psychological story than a monsters-in-the dark tale, but there are plenty of moments of harrowing survival sequences, from getting lost in the cave to battling against a failing suit to eluding the Tunneler. While I would have enjoyed a bit more description of the cave, more along the line of Jules Verne’s stalactites and stalagmites creating cathedrals underground, Caitlin Starling nonetheless captures the feeling of the cave and the drive of adventure and greed mixed into death. The Audible version further capitalizes on the tension, on the unknown and the feared, and brings alive the terror and the weird, Stockholm-like bond the two women ultimately form. I enjoyed the story so much, from the atmosphere to the ingenuity to the hint of mystery that remains at the end, that I bought the actual paperback for my library. I can see myself wanting to return to this world, this story, again and again. Something waits in the darkness. Something calls.