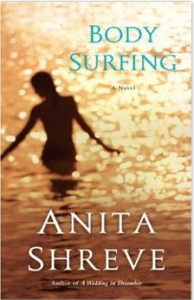 Twenty-nine year old Sydney is once divorced and once widowed. Seeking refuge from a shattered future, she takes a job tutoring the “slow” daughter of the Edwards at their ocean-front, New Hampshire beach house. Seduced by the atmosphere of sand and summer, Sydney watches the Edwards with a curious detachment, especially when their two eldest sons arrive for the summer. Caught in one of her body surfing escapades, the two brothers are fascinated by Sydney. So begins Sydney’s strange love of one brother and suspicious hate of the other.

Convinced that three times would be too many, and that her life is destined to progress without a mate, Sydney’s emotional vulnerability opens her to the brothers. Trailing along on a midnight body surfing spree, a slither hand under the darkness of the waves leaves her disgusted whereas the kind behavior of the other brother draws her closer to the Edwards family. Meanwhile, Julie (the slow daughter) is discovering herself while the family enjoys the languor of the beach and the slow, steady progression of a seemingly endless summer.

Taking place in the same locations as The Pilot’s Wife, Sea Glass, and Fortune’s Rocks, Body Surfing is a contemporary story that draws on the locality of history. Hardly enough to stand on its own, the background of the house entices previous Shreve readers and establishes a sense of familiarity that is the story’s strongest feature. The sensuality of the language, the way the sun beads across the water, the salt stains the window panes, and the gritty sand of the beach strewn into rooms and up the stairs captivates. Lobster meals, decadent in atmosphere despite sparing description bring the sense of vacation to the reader.  Already anticipating my own beach trip in August, I feel into the luxury of the atmosphere and the very touch-ability of the landscape, the water, the humid, salt stung air. Body Surfing is a fantastic example of writing evoking place to the degree that place becomes a character in and of itself.

Sadly, this is the only positive attribute an otherwise Spartan novel boasts. Having previously read and loved Shreve’s deeply emotional, yet not over processed novels (Light on Snow, Sea Glass, The Pilot’s Wife, and The Weight of Water), I was anticipating a vivid atmosphere and a poignant yet understated emotional dilemma. While the atmosphere succeeds widely, the characters and their lives remain aloof, merely silhouettes against a shadow plot with no depth. Reverting to telling instead of showing, readers are given Sydney’s feelings and reactions in a sterile manner that, ironically, is over-trying to be dramatic. Loose ends remain flapping in the sea breeze, and the teenage interactions and overreactions feel forced, as though even the characters are lost and bored with the events of their stories. The complex emotional ties that bind are merely figments, as strong as wet paper and just as easily dissolved.

First, we have the subplot with the “slow” Julie, whose mother is determined that she be tutored and progress to college, where it is obvious to everyone else she will fail. Sydney is concerned for the girl, especially as her beauty grows with each day, yet she remains naïve and frightfully open. Suddenly, seeing a far off swimmer on the ocean, a tremulous sea which a childhood accident has left her terrified of, awakens Julie’s bravery and sexual instinct. She runs away with the mysterious woman surfer, only to be found with her lesbian lover later, an anticlimactic event where everyone shrugs, accepts the decision, and then moves on. The ideas themselves may lend to tension in the plot, but the actual execution doesn’t, and the sudden transferring of the “Julie education problem” into the “Julie’s a talented artist and groundbreaking lesbian” are two puzzle pieces that don’t fit together. They aren’t even really from the same puzzle.

Of course, that brings me to the far worse execution of the main plot: Sydney’s devastating romantic past and her current love affair with Jeff, the kinder of the two brothers. Despite her age and apparent experience (her first marriage having led to divorce at her own instigation), Sydney acts as though she has never met or interacted with a man before. She goes head over heels in love and into engagement, leaving readers turning back the pages to see what we have missed. Her poor judgement is evident, and the “grand romance” that elicits her response is tame, terse, and unappealing.

The story transitions into a revelation and a betrayal, both of which tow the odd line between melodrama and emotional starkness. The big reveal feels forced, Sydney’s reactions not truly tied to anything else in the plot, leading the story to meander to a stilted conclusion. Immediately after reading, details of the story blur, and readers start forgetting.

A mismatch of ideas not fully fleshed out and undeveloped characters, I was only able to finish Body Surfing because it was short and I had the audio edition, which I could listen to while formatting documents and cleaning. A completely forgettable story unworthy of Shreve’s other, great works, give Body Surfing a skip.

*A Note on Edition: I listened to the audio book edition read by Lolita Davidovich. Sadly, the reading and dramatic tones highlighted the lack of true content in the story and amplified the “trying too hard” atmosphere. Combined with the audio book’s irritating tendency to mix in music and sea waves, the reading only accentuates everything the story lacks.