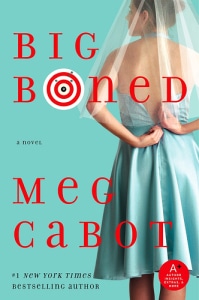 Ex-pop star, now plus size Assistant Dormitory Professor, Heather Wells is having a very bad day already. First, her rebound boyfriend, the athletic, vegan, carb counting Tad has somehow convinced her to get up at 6 in the morning for a run, and her uterus just may have fallen out along the way. It doesn’t look as though this day is going to get any better, either, because her boss has apparently been shot in the head over his morning brew of coffee. Meanwhile, the campus graduate school association is making a stink, wanting better wages and more respect for their workers; Heather’s father has a new scheme to re-launch her long since dead fame, and her roommate Cooper is still gorgeous and unobtainable. On top of it all, Tad keeps bringing her healthy, gluten free treats and this girl needs some serious chocolate right about now. The third in the Heather Wells cozy mystery series, and the first that I have read, Big Boned is a rollicking cozy mystery mixed with comedy and the better moments of college life. Discovered in a random library prowl, I’m now determined to go back and start the fairly short book series from the beginning.

What works: the humor. While the novel itself is a little slow (oh, ok, a lot slow) the humor ties readers to the character and situation. Even though I have not read the first two editions in this series, circumstances were well enough explained that I could easily follow and the hints of mysteries before (such as a Satanic frat ceremony) sound intriguing enough to make readers want to go back and start at the very beginning. Many reviewers who started with Meg Cabot’s first Heather Wells seemed vastly disappointed in this novel, writing that the humor was strained, the mystery overly simplistic, the sleuthing minimal compared to the other books. All probably true. As a starting place, I saw the plodding plot and nodded at the jokes that just bounced and missed, but the original attractor to this series is in enough abundance that I really didn’t care. I had fun reading this and was excited to hear that it is apparently the weakest in the series. If this is the weakest, then I can’t wait for the best!

But what about the pop start element you exclaim. Yes, yes, the kitschy angle is there with each chapter separated by a separate song quote from Heather, meant to be comical. While I tend to be averse to anything pop culture/celebrity like in a cozy mystery (I’m still shuddering, remembering the last Shopaholic novel where she went to Hollywood) this particular series keeps it more real (Heather was a childhood star, failed obviously). Could the novel do just as well without this element? Yes. Overall, however, Heather is an every-man (or should I say everywoman) protagonist. The supporting characters, who seem to be reappearing protagonists (or villains) have their own charm, wit, and intriguing side-stories (many of them romance related.) It’s fun and readers care for everyone, even the grouchy, murdered college president (in a way) and the killer.

The mystery itself is slow and as with many cozy mysteries, sleuthing takes back seat to characterization and setting. The revelation is still delicious and cleverly crafted with a tense confrontation scene (of course) and a cat subplot (yesss!)

The conclusion spirals more into romance, however, as the killer is long since carted off and the novel just keeps going. It’s . . . too perfect. It’s corny. But, ultimately, it is oddly satisfying. Big Boned is a cozy mystery after all, and the ending-on-a-happily-ever-after-note, while not literary, has a certain attraction. Of course, it is accelerated but . . .  welcome to the world of cozy mysteries where no one has to follow the rules. Recommended.

*A Note on Edition: I picked up the audiobook edition of Big Boned read by Justine Eyre. Ms Eyre projects a unique voice and intonation for each character and performs excellent accents. She makes the novel come alive and keeps the atmosphere cozy. Listening to this book is a definite asset.