Angels at the Gate 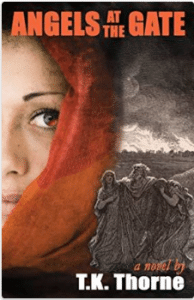 The Woman Who Became a Pillar of Salt

Adira, disguised as a boy, has long followed in her father’s footsteps; she is an adamant negotiator and a valuable resource to her father’s caravan. But as she grows older, it becomes evident that soon she must relinquish her freedom and declare her womanhood, returning to the tents of Sarai and Abraham. Allowed one farewell trip with the caravan, she encounters Elohim’s (El) messengers, two Northern Men thought by Abraham to be angels and a messenger of the gods. Disobeying her father’s wishes, Adira once again strives for independence, secretly teaching the angel men her language and bartering with them to acquire her faithful dog, Nami.

When Adira’s last peaceful journey is interrupted by a brutal siege, leaving her fatherless and bound to return to the tents of Sarai, Adira instead begins an epic quest across the desert to seek love, adventure, and retribution. She finds both awakening and despair, eventually becoming the famed wife of Lot who, when fleeing the city of Sodom, destroyed by a rain of fire from God, looks back and turns into a pillar of salt.

Building upon the mystery of Lot’s wife, and the controversial destruction of Sodom and Gomorrah, Angels at the Gate is a literary take on why a woman would look upon certain doom. This is both troublesome to the book (from a Christian perspective anyway) and intriguing. But first, to deal with the issue that arises and which has been noted in other reviews I’ve sussed out on the Internet: the Biblical basis of this tale.

Essentially, the story is more pagan in tone and origination with worship for Asherath, Baal, Mot, and a multiplicity of other gods, combining a neo-modern all-roads-lead-to-Heaven approach. Abraham and Sarai aren’t key characters, but Lot is and his projected duty to God is played off more as the power trip of a petty and small minded man with some major character flaws. The angels themselves are not from God in particular; instead they are “Watchers” (some recognize this term from various theories discussed about the Nephilim and the mating of demons with mortal woman) seeking a way to reconnect more with the goddess and the flow of time. As you can ascertain, it’s not traditionally Christian and some points of the narrative (Lot’s sheer vindictiveness and his actions toward his daughters) leave the “one god” El in a villainous or possibly imaginary position. Sigh.

As a Christian myself, however, I still greatly enjoyed the book; audiences must divorce Biblical teachings from the perception of the narrative and accept it as imaginative fiction with a historical context. It’s evident fairly early on that like Adira, the novel intends to make its own course, and while much research is employed (look at the appendix for references to the Bible, the Torah, and the Koran), the story is essentially a universe of its own creation. There are moments where the tale does feel as though it gives Christianity (or at the least the Torah – aka Old Testament) a good smack in the face, which are displeasing and uncomfortable for religious audiences. However, mostly the story has an almost fantasy like appeal, and the dramatic deviations from our expectations keep the tale from ever being predictable. This star will not track to any world except the one of its creation. In summary, this  book is not Christian fiction.

Now that I’ve dealt with the controversy, on with the show. The novel begins by attempting to capture an atmosphere of olden times and almost feels self-conscious in this pursuit. However, as the narrative continues, Adira ceases to be a creation of her time and historical setting and becomes a strong protagonist who captivates readers with both her daring and her general goodness. She’s the type of heroine I’ve always found attractive: she lives outside the norms, evinces bravery and a willingness to experience journeys that would be terrifying to others, and above all places the love of family and friends at the zenith of her actions. The novel is told through her prospective, the writing engaging readers with Adira’s transition from a youth smitten by the idea of love into a woman, mired with the responsibility of knowledge and fear.

The characters of the angels are unexpected, and while distant at first, both Mika and Ralph come into their own. When the tale eventually leads to Adira’s life with Lot, the tension escalates and the characterization deepens with despair. Transformation and answers to lifelong questions lead Adira to a deeper understanding of self and what drives those around her. The angels, possibly not even sent from any god, are instrumental in Adira’s emotional development and her maturation and as such, perhaps they are angels in her life.

Angels at the Gate is hardly about just the internal, although we are privy to the workings of Adira’s mind. Sequences of action and disaster keep the narrative liminal. We never feel a sense of ease for any character or situation, but instead the shifting of unsteady sands that takes a historically based narrative and gives it a breathless, epic tone.

Sodom is not the expected city of endless sin. While there is a certain abandon during Spring Rites (aka, orgy season to enhance the fertility of crops through the union of Baal and Asheroth), Sodom stands out more for its depressing location. The fields of pitch surrounding it and the horrible smells drifting in from the sea are a prison to the once desert roaming Adira. Lot’s pretension leads the focus of the city, already a place not exceptionally friendly, to land on him and his family as the blame for continued famine, and the town takes on its own dark, but oddly poignant character.

Knowing, or thinking we know, what the ending of the story must be (the pillar of salt conclusion of Lot’s unfortunate wife), Angels at the Gates plays with our perceptions and expectations. I don’t want to give away the ending (because that was my favorite moment on so many levels), but the conclusion went far beyond both unexpected and satisfactory. There was a feeling of completeness, a long journey finished, and a sensation of having received all the essential answers during Adira’s character arc. And yes, we do get to witness the rain of fire on Sodom, so expect drama!

While Angels at the Gate disappoints expectations for a Christian novel, it nevertheless proves a worthy historical fiction and an engaging story. Recommended.